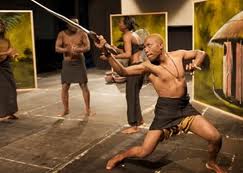 The setting and scenery are new for both sets of actors. However, the platform presents an opportunity for exposure and a new direction that could alter theatre and bring something unique on stage.

That best sums up the collaboration between Nanzikam¬be Arts of Malawi and Theatre Konstanz of Germany which has already created a unique production titled World 3.0 – The Aid Machinery.

A couple of Nanzikambe Arts Theatre actors are in Germany where they have been involved in rehearsals with actors from Theatre Konstanz in the production of World 3.0 – The Aid Machinery which was premiered on June 8.

Misheck Mzumara, one of Nanzikambe’s actors who is involved in the production, says working with the German crew has been a big experience for them.

“A lot of work has been put into the production of the play. You know working with Germans you really have to be on your toes as these people are strict with time, mindful of minute details and they always try to do the best,” he told Malawi News.

Mzumara said Malawian actors need such platforms where they can learn new tricks in the¬atre production and that through the partnership they were acquiring some new skills.

Another actor who is part of the casting in the play Jeremiah Mwaungulu said this is a plat¬form for them to learn.

“As Malawian actors we have little resources with poor infra¬structure for theatre but here it’s something different. It’s quite an exciting experience here in Germany, working with Germany

We have shown potential that Malawi can do it but resources and support make the difference,” said Mwaungulu, a former actor for Wakhumbata and Wanna Do drama groups.

Aid Machinery, is the final major project of the three year collaboration between Nanzikambe Arts and Theatre Konstanz, which is sponsored by the Wanderlust Fund of the Federal Cultural Foundation of Germany under the Crossing Boarders Project.

With a common ensemble of Malawian and German actors, directors and writers, Aid Machinery was created as development aid as its central theme.

The piece was authored by a four member team namely Thokozani Kapiri and Mzumara from Malawi and Thomas Spieckermann and Clemens Betchel from Germany.

Theatre Konstanz’ Thomas Spieckermann, who has been to Malawi and watched some of Nanzikambe’s productions, noted that the partnership is reaping fruits and that it is benefiting both Malawi and German theatre.

“We are happy to work together on this play, we had more time doing rehearsals and it’s quite an exciting experience working on this play which has involved a lot of things; you talk of the research in both Malawi and Ger¬many. It’s a play which seeks to communicate something as regards to aid so Germans and Malawians better look forward to watching it,” he said.

According to Mzumara, the play did not just come up as the authors had to conduct interviews and embark on research to seek views from non-governmental organisations in Malawi and Germany as well as holding several workshops with Malawi and German actors.

“We are happy now because the play premiered on the 8 June 2012 at Theatre Konstanz. It was an experience facing a different audience with people of different races,” explained Mzumara.

The multilingual play will be staged in Malawi after the German tour, where is has drawn a lot of comments.

“People in Germany were eager to watch the play that has tapped on the topic that connects Germany and Malawi – development aid. The issue of development aid does not only involve Malawi alone but several African countries,” he said.

The NGO office in Germany wants to bring electricity to a village in Malawi so as to improve people’s lives. How¬ever it is the people in the rural area of Malawi who have to decide where the electricity should be put.

Is it the clinics, schools or people’s homes? That is where the village power structure comes into focus.

The NGO office in Malawi has actors Susi Wirth as project coordinator, Dipo Katimba who plays the accountant and engineer Thomas Ecke.

Having featured as managing director in an NGO office in Germany, Bulambo plays another key role in the village in Malawi starring as

the chief while his daughter is played by Otuli Masanza.

Jeremiah Mwaungulu plays the project field assistant with his wife as Dipo Katimba and Mzumara as the narrator.

The Malawian embassy team, represented by Herbert Chihana, First Secretary of Tourism, were also in attendance and were reportedly impressed with the play as well as the interaction between the Malawian and German actors.

Mzumara said despite the Euro games, the play has received a warm reception and that they are expected back in Malawi on July 9, 2012.

“We still have 17 shows to go. Tales of a Migrant, which is also our production, was performed at The Afro Festival and it will be performed again on the 16 and 17 June,” he said.

Godfrey Mbene is now back in the country having traveled with the team to Germany where he performed his one man play The Story of a Tiger.

With the play currently thrilling Ger¬man audience, Malawians can only look forward to their turn and simply see what it brings.