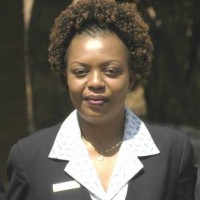 Former Miss Malawi Ireen Nkhwazi was involved in a verbal war with her ex-lover’s wife before she was attacked by thugs in Kawale Township in Lilongwe.

Information sourced by The Weekend Times indicates that Nkhwazi, alongside her friend only identified as Samantha, were attacked by thugs when the two went to Lawrence Mulambwaza’s residence late one night to confront his wife.

Sources privy to the matter alleged that Mulambwaza assaulted her when he did not find her when he went to check on her at her house. This made the beauty queen bitter and she decided to vent her anger on Mulambwaza’s wife.

Our source said Nkhwazi and Samantha stood at the gate of Mulambwaza’s house and hauled insults at the wife who was inside.

Meanwhile, thugs in the crime-infested township took advantage of the situation and attacked Nkhwazi and her friend.

But a well-placed police source confided in The Weekend Times that the matter was being handled by the Police.

“When the girls were ambushed late at night, the Police were called in. Maybe they did not record the incident, that’s why they are reluc¬tant to speak on the matter. But the truth of the matter was that the girls’ action were bizarre as their shouts raised alarm in the neighbourhood,” said a police source.

Mulambwaza himself confirmed the incident but denied assaulting Nkhwazi. He claimed he only accused her of messing around with his life.

“Of course, she used to be my girlfriend but it is long time ago. I don’t understand why she decided to come to my house to launch an attack on my innocent wife. May be she wanted to snatch me from my wife. But that is impossible, you know some ladies come to you when they smell cash just to mess up your life and family,” said Mlambwaza, a part-time politician and comedian famous for mimicking famous people’s voices.

On her part Nkhwazi denied confronting Mlambwaza’s wife, saying the issue was being exaggerated.

“I can’t sink so low like that. I have a name, family and reputation to protect. Of course, I remember that my friend, who borrowed my car, was attacked in Area 11, not in Kawale. I think the way this matter is being presented is complicated because two different things are combined,” she said.

The former Miss Malawi confirmed having an altercation with Mulambwaza at some point and that she was pissed off with him.

“He has been pestering me but I did not give in. At one time, he really said something which pissed me off but I didn’t take it any further. You may wish to know that I have a settled family with an Italian so these fabrications are aimed at tarnishing my image,” said Nkhwazi