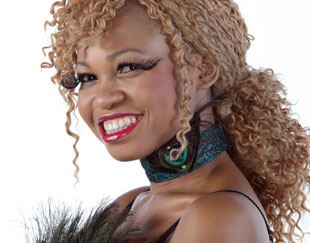 Goldie hit the limelight with her hit song, Say My Name and was, before her passing, clearly, the most prominent member of Kennis Music, aside from Capital Femi.

Known for her outrageous and dramatic dress sense, Goldie hit continental stardom after her turn on reality show, Big Brother StarGame, where she fell for the charms of Kenyan rapper, Prezzo.

Rumours of a marriage between the two started circulating recently, but Prezzo was quick to discount the news.

Goldie has been busy since her stint in the BBA house and has released a few singles like Skibobo, Miliki and Got to Have it. Skibobo in which she featured AY seems to have made the biggest splash.

Goldie attended the 2013 Grammy Awards at the Staples Centre alongside her label owners, Kenny Ogungbe and Dayo D1 Adeneye.

Kennis Music has released an official statement regarding her sudden death, which reads: ““With a deep sense of loss, we announce the shocking death of our darling music star, Goldie Harvey.

Goldie, 31, died on Thursday after she complained of a severe headache shortly after her arrival from the United States where she went to witness the Grammy Awards.

She was rushed from her Park View, Ikoyi, Lagos residence to her official hospital, Reddington, Victoria Island, Lagos, where doctors pronounced her dead on arrival at exactly 7:30 in the evening.

We consider this period a gloomy moment for us and the entire Nigerian music industry in view of the circumstance in which she passed away; the abundance of talent she exhibited in her short but eventful music career and the various opportunities her trip to the United States of America would have availed her. She is survived by her father, step- mother, brothers and sisters.

We deeply sympathise with her family and fans all over the world and are very grateful to all and sundry, especially, the vibrant Nigerian media for their concern and prompt reportage.

We shall keep everybody informed as events unfold as we are devastated by the sudden loss.”