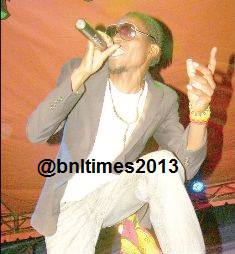 The darkness that engulfed BAT Ground in Blantyre on a cold Saturday evening was not enough to discourage a sizeable crowd that had waited for 2Face to appear since the afternoon.

The Nigerian rapper appeared on stage just before 8pm although the show was billed to start with the supporting cast by midday.

Some of the fans interviewed on Friday said the K5,000 entry fee was too much considering that artists of 2Face calibre usually attract youthful audience due to the hype created by TV and social media.

The local artists Piksy, Trummel, Hazel Mak, Agorosso, Maskal, Blasto and Dikamawoko did not disappoint as they moved the audience with captivating performances.

Blasto was energetic, connected with the audience but his frequent pulling out of his songs were a nuisance as they never gave a chance to fans to enjoy the hits.

Mr. C, powered by Samsung was the MC. He gave hope to the audience time and again that 2Face would be at BAT to perform. He also conducted a competition during which one fan won a Galaxy Tab.

The Nigerian singer, who performed using a live band, started his set with greeting the audience in Chichewa. He performed ‘One Love,’ highlighting that Africa was one despite the differences in language. However, it was ‘African Queen,’ that attracted loud cheers from the audience who had enjoyed an energetic performance.

He performed for almost an hour with a few of his songs and added up with songs done by other artists including hits by fellow Nigerian artists P Square. – By Sam Banda Jnr