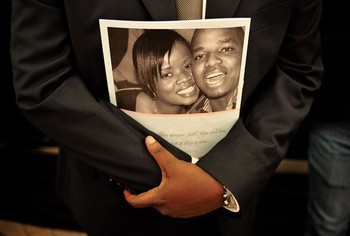 They were inseparable in life and now in death. They had planned to wed next Saturday, but the terrorists cut short their dream. And Friday, they were united in the grave.

The love bond between Mbugua Mwangi and Rosemary Wahito was so strong that even though they were not formally married, their parents endorsed their marriage posthumously.

Before he met his death, Mbugua had already received the blessings of Rosemary’s parents to marry their daughter, and he was scheduled to pay dowry Saturday.

The 29-year-old businessman was wrapping up plans for their big day, and the two had already chosen their dress code and settled on the flavour of their cake.

The only thing that had not been confirmed was the venue of the wedding, according to Mbugua’s eulogy.

In what mourners, and even church leaders, agreed was the ultimate show of love, Mbugua and Rosemary died of seven bullet wounds to their chests as they embraced each other. What is more, Mbugua died while shielding his girlfriend from the gun-totting Al-Shabaab attackers.

This was revealed during a solemn funeral service for the two at the Nairobi Chapel, attended by top government officials, including President Kenyatta, who happens to be Mbugua’s uncle.

“The postmortem report indicated the two died of gunshot wounds in the same area around the chest, an indication that Mbugua was a brave man who tried to shield his fiancée,” she said.

Their relationship had matured after developing soft spots for each since childhood.

“It was agreed that the couple who fell in love two years ago, be buried together, having gone through the traditional rituals. Mourners said they had also shown commitment to each other — just like a married couple. The couple was to be laid to rest at Mbugua’s parents’ farm in Gatundu, next to founding President’s Jomo Kenyatta home.

Mrs Mugo recalled how Mbugua, accompanied by the fiancée, broke the news to her that he was planning to marry his girlfriend during breakfast at her house on the fateful Saturday. It was after this happy moment that the couple left for the shopping, oblivious of what lay ahead.

The two were seated at a restaurant when the attackers opened fire on them, according to two of Mrs Mugo’s granddaughters, who survived the attack.

Mbugua was the only child of Kenya’s Ambassador to Ireland Catherine Muigai and Captain Michael Mwangi.

He was eulogised as an industrious and self-driven man, who did not rely on family members in high places, but worked hard to start his own insurance brokerage firm. He was the managing director of the company at the time of his death.

The two were among scores of shoppers and staff who were felled by bullets in the brutal attack.

So far, the death toll stands at 67 while 61 people are still missing. The latter are believed to be trapped under the rubble of three floors that collapsed towards the end of the four-day siege.

President Kenyatta cut a resilient figure in the face of terrorism.

“Don’t’ mourn but celebrate a society that is able to bring up such loving young people,” he said of his nephew and his girlfriend.

President Kenyatta said, with so many families bereaved, a national tragedy had become a personal, one but urged those who lost loved ones to take courage.

He said God, and the whole nation, stood with them at the difficult time.