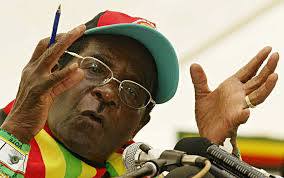 Zanu-PF has rubbished as “absolute nonsense” weekend reports that Zimbabwean President Robert Mugabe, 89, had collapsed, saying the reports were aimed at causing “false alarm and despondency”.

Zanu-PF deputy director of information, Psychology Maziwisa, told a South African news agency that the reports came from “prophets of doom who were motivated by malice”.

“Certainly there is nothing new about these reports as we hear about them every year. Our president in very much alive and we will be celebrating his birthday in a month’s time. He is as fit as a fiddle,” said Maziwisa.

Reports on Sunday quoted Baba Jukwa – an insider from the ruling Zanu-PF government – as suggesting that security at Mugabe’s official residence, State House in Harare, had been beefed up after the veteran leader collapsed.

There have been rumours over the years that Mugabe, who turns 90 next month, has prostate cancer.

Maziwisa said it was unfortunate that some people were still bitter about the outcome of the 31 July elections in which Mugabe’s party won overwhelmingly, and therefore wanted to paint a bad picture of the president.

“We’re aware of who these people are and we know about their tactics to try and smear the good name of our president. These are our opponents and critics who have failed dismally in elections. Now they want to use fake individuals to try and cause false alarm and despondency in our country,” said Maziwisa.

He said Mugabe was currently on his annual leave but refused to disclose where the president was holidaying, saying “security is very important. We can’t be disclosing everything about the president to the people.”

But according to the Daily News, Mugabe left for the Far East last week amid growing tension over the flagging economy and failure to align statutes to the new Constitution.

Some reports have indicated that Mugabe is receiving medical attention in Singapore whereas others have gone as far as suggesting that the Zimbabwean President has died.

George Charamba, the presidential spokesperson, said Mugabe was expected back in Zimbabwe in mid-January.