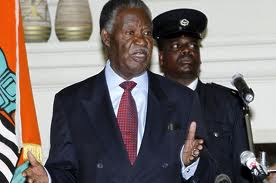 An opposition politician in Zambia has been arrested and charged with defamation after he compared the president to a potato.

The Bemba language phrase refers to a sweet potato that breaks when it is bent and is used to describe someone who does not listen to advice.

Mr Bwalya faces a maximum jail term of five years if he is convicted.

He is a former pastor and ex-supporter of Mr Sata. He now heads the opposition Alliance for a Better Zambia (ABZ) party.

“President Sata is the same old man who was on all radio stations defaming former Presidents Banda and Mwanawasa and nobody arrested him,” said ABZ secretary-general Eric Chanda, the AFP news agency reports.

The phrase “chumbu mushololwa” was not an insult, he added.

“It describes a person who lacks flexibility and who like a potato [icumbu] will only break when you try to change their fixed ideas,” he said.

In September, Nevers Mumba of the opposition Movement for Multiparty Democracy (MMD) was questioned by police after allegedly calling Mr Sata a liar.

In 2005, a Zambian man, Edward Longe, was sentenced to nine months in prison for insulting then-President Mwanawasa in a bar.

The charges were subsequently dropped.