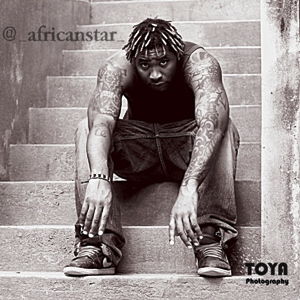 Desert Eagle also known as  African Star is the renowned artist who hails from Ghana but sometimes lives in Malawi in the commercial capital of Blantyre.

Eagle 26 started his music career while young but he came to light in the year 2003 when he released his first album titled Broken Silence. The album had 19 songs, with hit singles including nthofu feat Malawi’s shawishe and Envy me.

In 2006 he released his second album titled ‘Barren Land’ which had 16 tracks and the third album in 2010,titled ‘Open Cage’ which had also 16 songs

Currently the  African star is working on a new album called ‘African Star’ which is expected to have fourteen tracks.

Out of fourteen tracks, the singer is currently working on a single hit titled ‘spin the bottle’ and the single track is expected to hit the market in two to three weeks time.

The artist in this song tries to highlight different aspects of having fun in a party scenario.

The song will be sold through malawi-music.com, online website which gives Malawians a chance to download Music from Malawi for free.

The African Star is a sole musician who apart from singing he is also a producer.