What is the matter with … TB Joshua? 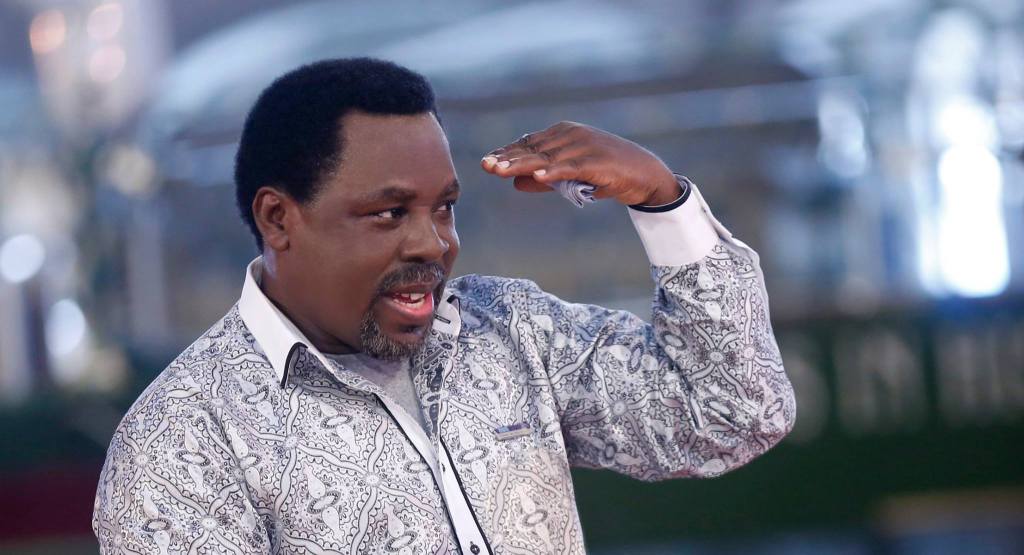 Last week a building that was part of the complex that is the Synagogue Church of All Nations in Lagos, Nigeria (‘pastor’: TB Joshua) collapsed. When the story was first reported on Friday, the death toll stood at 3 people.  Then yesterday, the South African President Jacob Zuma announced that “at least 67 South Africans were killed.” Nigerian rescue workers, according to the BBC, have now upped the total number of bodies pulled from the rubble at 70 people.  Some may wonder why it took so long (five days) for that information about 67 more victims to emerge.  The short answer is that the South African government had little control over that process: TB Joshua’s church has a reputation for acting outside the law (his church is usually off limits to Nigerian security forces and local authorities who struggled to get access to the site since the building collapse and the church most probably flouted building regulations. Apart from some tepid press statements, Joshua’s bizarre explanations for the building collapse was to blame the devil, a plane that sprayed a mysterious substance over the building and Boko Haram. But even more than that, some may wonder what so many South Africans were doing at Joshua’s church (at the time of the collapse, South African media reported that 5 South African church groups were visiting Joshua’s church).  There’s been some good coverage and comments about Nigerian preachers on Nigerian Twitter (see Elnathan John)  and on sites with a Nigerian focus, like Sahara Reporters (like this, here,

But back to TB Joshua, who represents a wider trend on the continent. Back in December 2011, Sean Jacobs wrote a post about TB Joshua (known for his outlandish claims about the future and who has Julius Malema among his fans) and his appeal, including, especially to South Africans. We’ve reproduced that post below:

By now you’ve probably watched the (British) Channel 4 TV documentary film about Nigeria’s millionaire preachers–the fake healings, buckets full of money collected by church leaders (“tithes”), police escorts, mall openings as well as all that flash. This all against a background of grinding poverty. I watched it last night. Most Nigerian blogs not surprisingly (many of them are believers of some sort), have focused on theological debates thrown up by the documentary. One of the preachers, Dr Fireman, when quizzed about his ostentatious show of wealth, responds to Channel 4′s journalist: “Jesus was rich and had an accountant who followed him around.” No one’s surprised that with low confidence in political parties and the state, people gravitate toward fast-money preachers promising eternal salvation, financial and physical health. However, it appears the filmmakers could only get to the B-List preachers since we didn’t see any of the really rich preachers. Those preachers, compiled in a list by a Forbes blogger earlier this Fall, include David Oyedepo (estimated net worth of $150m), Chris Oyakhilome ($30-50m) and TB Joshua ($10-15m).  Of all these men, it is perhaps Joshua is the most interesting (there’s even a TB Joshua Watch online).

TB Joshua claims to heal HIV/AIDS, cancer and paralysis at his Synagogue Church of All Nations in Lagos. More significantly, he has also found a willing audience among African elites, especially its political class and leading sporting personalities.

But first to his claims as a healer.

Joshua serves as an advisor to many of Nigerian leading sports people. They  thank him profusely for their good health. But it is not just his country’s sports people who have put their trust in Joshua’s healing powers. In one celebrated case, Jaco van der Westhuyzen, a top rugby player from South Africa traveled to Lagos with a knee injury and claimed to have been healed by TB Joshua. Two fellow Springbok team members, who had cancer, also traveled to Lagos to see Joshua and promptly stopped their treatments.  Two of Van der Westhyzen’s teammates, Ruben Kruger andWuim Basson, also went to see TB Joshua. He claimed to heal them too, but they died of their cancers. Consistent with evangelical Christianity’s teachings, Kruger and Basson’s failure to get well were rationalized as their lack of faith. (In Basson’s case, Joshua even claimed to communicate with him beyond the grave.)

As for the politically connected who travel to see and hear Joshua in Nigeria, they include Ghanaian president John Atta Mills, of whom it is claimed that “… Joshua had prophesied his victory in the Ghanaian polls, specifying there would be three elections and the results would be released in January.” Atta Mills has described Joshua as a mentor.

Separately, a Zimbabwean newspaper reported that prime minister Morgan Tsvangirai visited Joshua’s church in September. So have other leaders of Tsvangirai’s MDC movement as well as Mugabe’s ZANU-PF. Some were hoping it would give them an edge in party political contests.

Not all governing elites are as welcoming of TB Joshua and his healings (and predictions–he claims to foresee plane crashes, natural disasters, though critics point out that the videos where he apparently makes such predictions are cleverly edited). In fact, Cameroon has banned Joshua.

But the most curious recent guest at Joshua’s church has been Winnie Mandela, seen in this recent video, below, with Joshua’s Emmanuel TV, referring to herself as “the grandmother of Africa,” blamed everything that’s wrong on the continent on modernity (except Christianity of course) and who suggested Africa needs “democracy of a special type”:

BTW, we keep wondering why do South Africans travel to Nigeria, when they have their own miracle-making farmer at home?