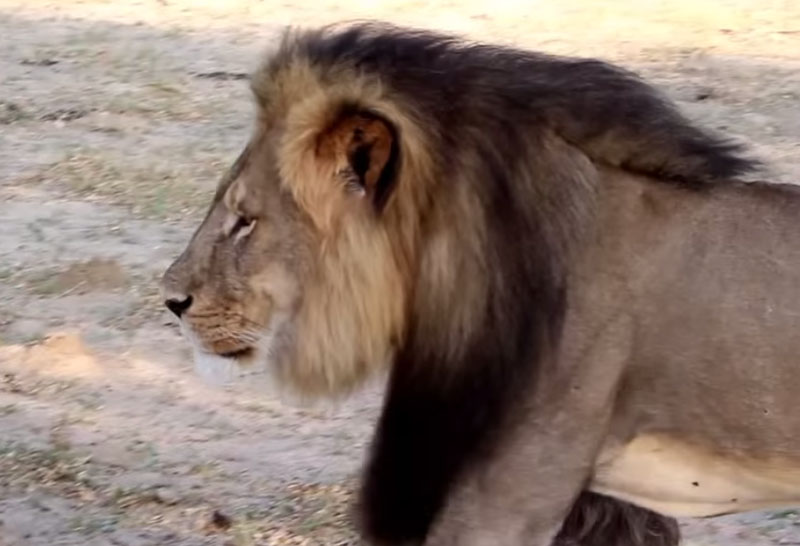 The lion pictured above was named Cecil, and he lived in Zimbabwe’s Hwange National Park. In early July, an American dentist named Walter James Palmer lured him out of the park and shot him with a crossbow. Palmer tracked the wounded lion for 40 more hours before finally shooting and killing him.

Since Cecil’s story was widely reported this week, it’s taken over the internet. It also gets at some surprising issue about the economics and ethics of big-game hunting and wildlife conservation — in Zimbabwe and globally. Here’s a guide to a tragedy — and what it means.

1) What happened to Cecil?

The details of Cecil’s killing are disturbing — and they’re important for understanding why this has become such a controversy.

Hwange National Park is a “free roam” zone under Zimbabwean law, which means that hunting isn’t allowed in the park and killing Cecil inside of it would have been illegal.

When Walter James Palmer, a dentist from Minnesota, went to Zimbabwe in July, he found a way around this law. According to the Zimbabwe Parks & Wildlife Management Authority, two locals are facing charges for assisting in Cecil’s killing: a hunter identified as Theo Bronkhorst and a local farmer identified as Honest Trymore Ndlovu.

The three of them strapped an animal carcass to a car they parked outside Hwange, on Ndlovu’s farm, as bait to draw out Cecil. Once Cecil left the park, it became theoretically legal to shoot him, which Palmer did, with a crossbow.

The arrow only wounded the lion. Palmer stalked him for 40 hours, and then shot him again, this time with a rifle. Then Palmer, Bronkhorst, and Ndlovu skinned his corpse and cut off his head.

2) How did this become such a big deal?

Part of the outrage comes from the sheer brutality of the facts, and the cynical way that Palmer seems to have gotten around Zimbabwean law.

But that’s not enough to explain the surge of outrage. Big-game hunting is by definition stalking, killing, and skinning beautiful animals like lions, and it happens all the time. This case was clearly different.

Here’s why: Cecil was a particularly high-profile lion. He was something of a mascot for Hwange National Park and beloved around Zimbabwe for his distinctive black mane. The Guardian describes him as “one of Africa’s most famous lions and the star attraction at the Hwange national park.”

Killing him feels like a violation, and robbing Zimbabweans of this beloved symbol seems particularly ugly — not to mention a disturbing echo of colonial-era practices of robbing sub-Saharan Africans of their heritage and natural resources.

Cecil had an international profile, as well. He was part of an Oxford University study on lion conservation in Zimbabwe, and Oxford’s researchers were happy to speak to the press after the news broke.

“It’s not many months ago that I watched Cecil with my hand on my heart as he strayed toward a hunting concession,” professor David Macdonald, founding director of Oxford’s Wildlife Conservation Research Unit, told CNN. “On that occasion he turned back into the protection of the park, but this time he made a fatal mistake and I feel deeply sad, personally.”

That’s contested. The Zimbabwean government insists it was illegal; Palmer says it was legal.

Killing lions isn’t illegal in Zimbabwe, necessarily. The question is whether you have the appropriate permission to hunt.

According to the Zimbabwe Parks and Wildlife Management Authority, which issues hunting permits, Ndlovu did not have permission to hunt a lion on his farm. Therefore, any lion killing was illegal, and any participant is a poacher.

Bronkhorst has said they didn’t know that the lion they killed was Cecil, and that all of their permits were in order. “It was a magnificent, mature lion. We did not know it was [a] well-known lion. I had a license for my client to shoot a lion with a bow and arrow in the area where it was shot,” he told the Telegraph.

Palmer insists on his innocence. “I hired several professional guides and they secured all proper permits. To my knowledge, everything about this trip was legal and properly handled and conducted,” he said in a statement to the Minnesota Star-Tribune. “I had no idea that the lion I took was a known, local favorite, was collared and part of a study until the end of the hunt. I relied on the expertise of my local professional guides to ensure a legal hunt.”

4) How angry are people?

Very. Ryan Broderick has a really good rundown at BuzzFeed of the internet rage so far. It includes:

Twitter users sharing Palmer’s contact info, including his office, after “Cecil the Lion” and “Walter Palmer” trended on the site. (This is a practice that is often used online to facilitate real-world harassment of targets.)
Flooding Palmer’s office’s Yelp and Facebook page with negative reviews and angry comments.
A petition — signed by more than 77,000 people — for “Justice for Cecil.” The petitioners call on Zimbabwe to “to stop issuing hunting permits to kill endangered animals!”
Palmer expressed a measure of remorse in his statement. “I deeply regret that my pursuit of an activity I love and practice responsibly and legally resulted in the taking of this lion,” he said.

5) Is Cecil’s killing part of a bigger problem?

Yes. “Nearly a century ago an estimated 200,000 lions roamed across Africa,” National Geographic’s Brian Clark Howard reports. “Now there are less than 30,000, and they are considered highly vulnerable.”

The biggest problem, according to a 2012 study coordinated by Duke University researchers, is loss of habitat. The more human populations expand, the less space lions have to roam and hunt. Moreover, it brings human and lion populations into contact, making humans more likely to kill them.

“Hunting areas are extensive, so the fate of lions depends on how well user-communities manage them,” the 2012 study concluded. In other words, keeping the world’s already frail lion populations from getting much smaller will require the world to carefully and responsibly manage those populations. That didn’t really happen here.

Cecil’s killing is clearly something that Zimbabwe’s wildlife conservation policy intended to prevent. That failure here speaks to the larger failures to protect global lion populations.

There is a live debate among conservation experts about this. Some argue that legal, regulated big-game hunting is a good way to preserve endangered species as a whole, even at the cost of individual animal lives.

Jason Goldman, writing in Conservation Magazine, has a really good rundown of the case for big-game hunting. One argument is essentially taxation: If the government takes a cut of the money spent on legal safaris and devotes it to conservation efforts, they’ll be able to spend more money on the root causes of lion decline.

Another, perhaps stronger argument is that profitable, legal hunting makes people more likely to protect animals. Nigel Leader-Williams, a professor at the University of Cambridge, led a study on rhinoceros hunting in South Africa. It found that legal hunting made landowners more likely to protect rhinos, which had just become a lucrative and renewable natural resource. The resulting gains in population dramatically outweighed the numbers lost to hunters. Leader-Williams also found something similar in Zimbabwe: “Implementing trophy hunting has doubled the area of the country under wildlife management relative to the 13% in state protected areas.”

But the story may be different when it comes to lions, and particularly the lions at Hwange National Park, where Cecil was.

Two of the Oxford researchers who were tracking Cecil, Andrew Loveridge and David Macdonald, looked at the effect of legal lion hunting outside of Hwange National Park on lion populations inside the park. They found evidence that the existence of legal hunting hurt the population inside the park: “Each removal of a male lion by hunters on the borders of the park created a ‘territorial vacuum’ which drew males from further inside the protected area into boundary areas, where they too became vulnerable to hunters.”

After the research, Zimbabwe suspended lion hunting around the park until 2009 — and the population went up by 50 percent. Since 2009, hunting around Hwange has been reintroduced, but is more limited.

These academic debates are important, but they only speak to the efficacy of legal animal hunting in general. All of this is moot if Palmer and his accomplices acted illegally or if Zimbabwe is mishandling its lion conservation efforts. Legal hunting to promote conservation doesn’t really work if the hunting is poorly managed or if hunters just break or circumvent the laws.

7) What will happen to Cecil’s family now?

This part is depressing. Cecil led two prides, totaling six lionesses and 12 cubs, along with another male, Jericho. Without Cecil, the family is in serious trouble, as male lions are generally tasked with protecting prides from other lions.

“Jericho as a single male will be unable to defend the two prides and cubs from new males that invade the territory,” Loveridge, the Oxford researcher, warned the Telegraph. “This is what we most often see happening in these cases. Infanticide is the most likely outcome.”