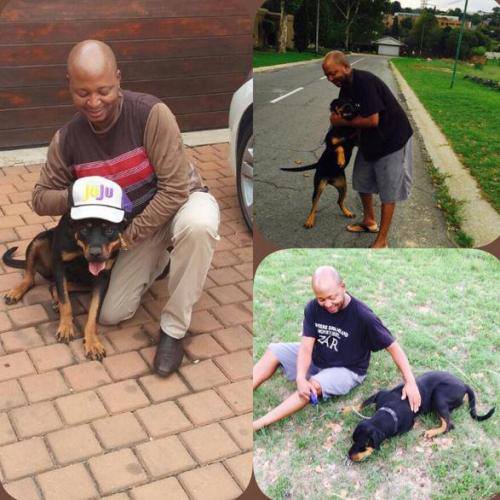 Their friendship is now a ‘once upon a time’. Kenny Kunene has dog named after Julius Malema-Juju and he’s not apologetic about it.

The controversial businessman posted a photo of himself and Juju (the dog) on social media with the caption, “My Dog Juju has grown so much, even the belly is so big. She’s so loyal to her master who feeds her. One thing about Juju is she knows when to bark at potential intruders and when to impress me and the boys . . . unlike some humans . . .”

Speaking to Sunday Sun Kunene said Juju the dog was not different from Juju the human saying they are both loyal and they listen to their masters. The Sushi King said Julius Malema’s masters are in England.

“If we compare Juju the human and Juju the dog, they’re both loyal. The dog is loyal to me and the human is loyal to his masters in England. Malema has characteristics of a dog. He barks everywhere, in Parliament he’s always barking. In Polokwane he barks in taverns. He wasn’t in Parliament on Thursday, so his masters in England told him to do something, so now he’s done a song just to make noise.”

Hmm, we wonder what Malema has to say to that, maybe he’ll get his own dog and name it after Kenny Kunene.