75,000 Could Starve to Death in Nigeria After Boko Haram- UN 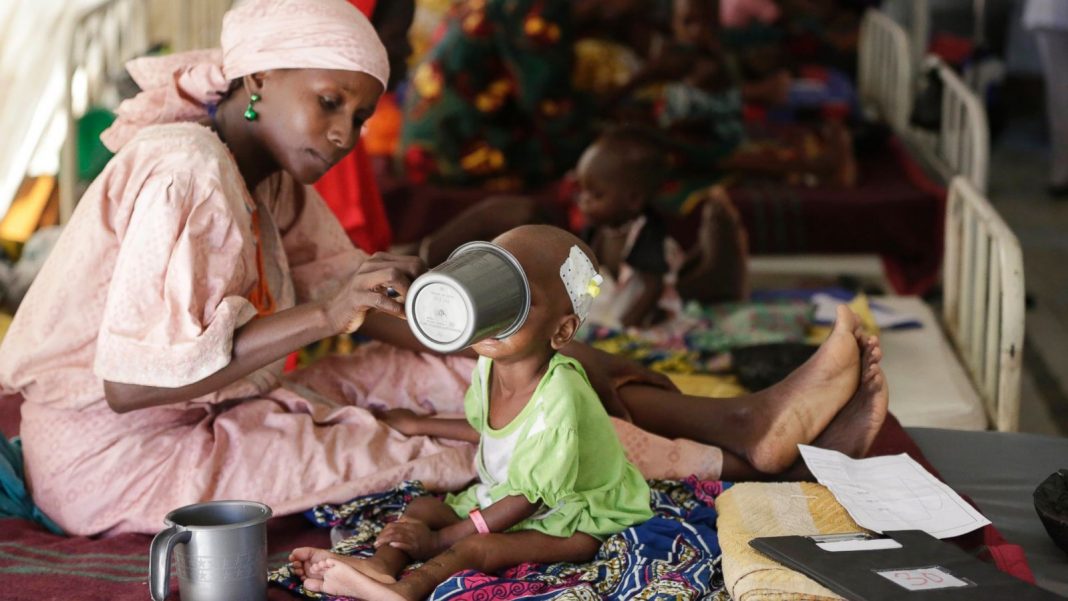 As many as 75,000 children will die over the next year in famine-like conditions created by Boko Haram  if donors don’t respond quickly, the U.N. Children’s Fund is warning. That’s far more than the 20,000 people killed in the seven-year Islamic uprising.

The severity of malnutrition levels and high number of children facing death make the humanitarian crisis confronting northeastern Nigeria perhaps the worst in the world, according to Arjan de Wagt, nutrition chief for UNICEF in Nigeria. He said children already are dying but donors are not responding.

Most severely malnourished children die of secondary illnesses like diarrhea and respiratory infections, de Wagt told The Associated Press. “But with famine, you actually die of hunger,” and that is what is happening, he said.

Severe malnutrition is being found in 20, 30 and even 50 percent of children in pockets of the region, he said.

“Globally, you just don’t see this. You have to go back to places like Somalia five years ago to see these kinds of levels,” de Wagt said. Nearly 260,000 people died in Somalia between 2010 and 2012 from severe drought aggravated by war. At the time, the United Nation said aid needed to be provided more quickly.

UNICEF on Thursday doubled the amount of its appeal for Nigeria, saying $115 million is needed to save children whose “lives are literally hanging by a thread.” Only $24 million has been raised so far, the agency said.

The lack of money has meant some 750,000 people living in accessible areas could not be helped this year, spokeswoman Doune Porter told the AP.

Most of the estimated 2.6 million people who fled Boko Haram’s insurgency are subsistence farmers who have been unable to plant for two years or more.

Several thousand people returned this month from refugee camps to towns being secured by Nigeria’s military, but it’s too late to plant as the rainy season draws to an end. Meanwhile, Boko Haram still attacks outside urban areas.

Of 4 million people in desperate need of food are about 2.2 million people trapped in areas where Boko Haram is operating or in newly liberated areas that still are too dangerous to reach by road, de Wagt said. Among them, 65,000 are living in famine-like conditions.

The crisis has reached “catastrophic levels” for people who have sought refuge in towns controlled by the military but who are “entirely reliant on outside aid that does not reach them,” aid group Doctors Without Borders said Wednesday.

“Many families are only able to eat once every few days and usually only watered-down porridge,” said Oxfam aid group spokeswoman Christina Corbett. “They are going to bed hungry and waking up with no way to change that.”

UNICEF limited its outreach to the region after Boko Haram fighters attacked a military-escorted humanitarian convoy in July, wounding a UNICEF worker and others when a rocket hit an armored car.

But de Wagt said the agency continues to deliver some therapeutic food by helicopter and to train local health workers to treat malnourished children living in dangerous areas.

Doctors Without Borders, also known by the French acronym MSF, said the highest levels of starving children are in camps in Maiduguri, the northeastern city free of conflict where aid workers have been active for two years.

“The mortality rate is five times higher than what is considered an emergency, with the main cause being hunger,” it said in its statement.

The Associated Press has reported recent allegations by displaced people and aid workers that food aid is being stolen in Maiduguri. Nigeria’s government has said it would investigate.

MSF said Nigerian authorities are responsible for ensuring aid is delivered and described the overall aid response as “massively insufficient, uncoordinated and ill-adapted.”

Muhammad Kanar, the area coordinator for Nigeria’s National Emergency Management Agency, denied there is even one case of malnutrition in Maiduguri. Some officials from his agency, which manages the camps, are among several accused of stealing food aid.