church members caught having sex at a night prayer 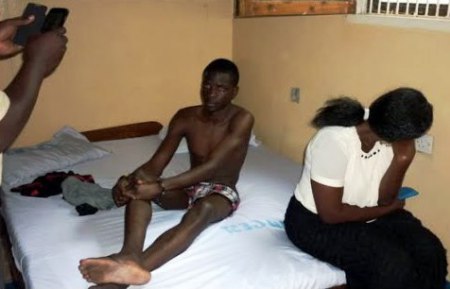 A couple (names withheld) that attended a night prayer was caught in the sex act after they sneaked out of the gathering whilst the prayers were still in process.

A 16 year old boy and a 14 year old girl were among members who attended the night prayers that took place in a location in Zimbabwe known as Makala.

Victoria falls magistrate, Lindiwe Maphosa got the news this week that the boy had proposed love to the girl on 1st October last year and she accepted on that very first approach and the two went ahead to have sex the same night in one of the huts at the same homestead.

Luckily in court, the boy escaped with a lesser charge of having sex with a young person and being the fact that the girl accepted his love proposal.

The magistrate postponed trial to February 27 and the boy was remanded in the custody of his parents.

Both the boy and girl stays in the same area.

The girl is doing Grade 7 at a Primary School in the area.

Allegations are that the boy led the girl to a hut where they had sex and were seen by his aunt.

“On that day, the two were at a night prayer in the area. During the night the boy proposed love to the girl and she accepted.

“At 3 a.m the same night the two left other members of the church and went to the boy’s hut where they had sex once. The matter came to light when the accused’s brother’s wife saw the two in the hut and told the girl’s aunt who then later reported the matter to the police,” said prosecutor Takunda Ndovorwi.

The girl was referred to a Hospital where it was confirmed that she had sex and the boy was arrested.