Hired Killer Fall In Love With The Lady He Suppose To Kill, Demands S*x In Order To Spare Her Life 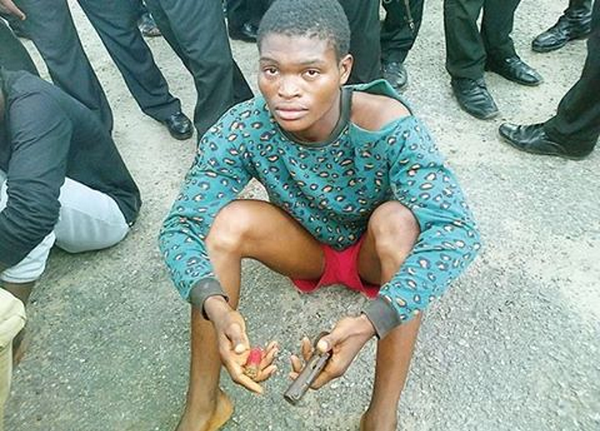 The Lagos State Police Command has arrested a 24-year-old suspect, Tayo Adeyemi, who confessed to have been hired to kill a female hotel lodger in the Alakija, Satellite Town area of the state.

Adeyemi, who hails from Kwara State, told reporters that he was arrested by the police after he sneaked into the hotel, (White House) and demanded that his target, simply known as Rosemary, had sex with him so he would spare her life.

It was gathered that Adeyemi, who dropped out of senior secondary school, was arrested by the Nigerian Satellite Town Police Division last Thursday.

It was learnt that penultimate Wednesday, Adeyemi was brought by two gang members on a motorcycle to the hotel to kill Rosemary.

However, once Adeyemi laid his eyes on his supposed target, he reportedly fell in love with her and eventually attempted to rape her after she rebuffed his pleas to have sex with him.
Rosemary, however, raised the alarm.

The hotel management subsequently called the police, and Adeyemi was arrested.

Our correspondent learnt that one locally-made pistol and a live cartridge were recovered from Adeyemi, who had been transferred to the Special Anti-Robbery Squad, Ikeja.

The police said the suspect belonged to a three-man gang, adding that a manhunt had been launched for the fleeing two gang members.

Speaking with PUNCH Metro, Adeyemi said he gave the woman N1,500 to have sex with her, adding that he fell in love with his target.

Adeyemi, who spoke in pidgin English, said, “I was working as a casual worker at a bottling company in the Apapa area before I met the gang members in the Ajegunle area. A friend, Wisdom, had invited me to stay in his house.
“His friends, who are Eiye Confraternity members, saw me and said they had a job for me. They said the job was to kill a woman. I said I could not do such a job, but they threatened to kill me and since they had guns, I was afraid.

“Finally, I was left with no option but to do their wish. One of them, Ahmed, gave me the gun and they brought me on a motorcycle to the hotel. But when I got to the hotel room and saw the woman, I fell in love with her and I had mercy on her.

“I told her that I was sent to kill her, but since I loved her, I would just have sex with her. When she declined, I offered her N1,500, and said I would take her necklaces and wristwatch away and lie to my gang members that she had been killed. But she raised the alarm.

“When my parents heard about my arrest, they were disappointed. I told them that I was being threatened by the cult members. I did not mean to kill the lady.
Otherwise, I would have shot her and run away.”

The state Commissioner of Police, Fatai Owoseni, said the command would not give criminals a breathing space in the state.