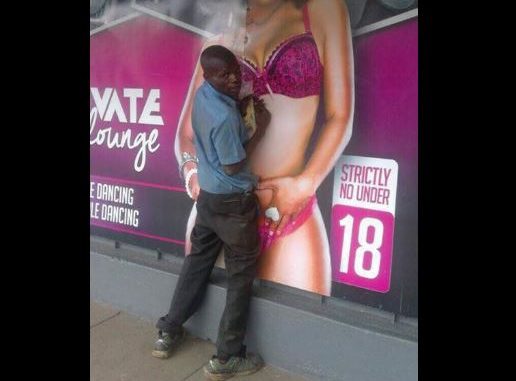 For weeks, a shop owner in Pretoria West came to the gusty sight of a white fluid on one of his shop’s windows.

The Pakistani owner always asked his employees to clean thinking it was bird poo.

But no one expected what it was until the culprit showed up in broad daylight and started bonking the large picture on the window.

Out of nowhere, a street kid appeared, lowered his shorts and started performing sex acts on the window display.

Passerby’s and shop attendants could not believe their ayes as the man unashamedly went about his business.

He continued until he finished, unfazed by the gazing eyes and clicking cameras.

The man, who has been dubbed “Semen Bandit” was however apprehended and told to clean his mess.

He was threatened with arrest should he continue helping himself.