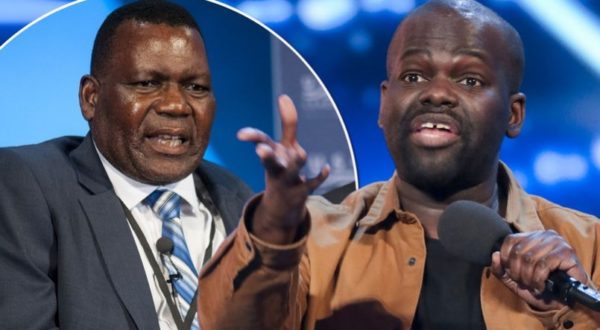 Former minister of justice who has also recently been fired as Agriculture, Irrigation and Water Development minister, George Chaponda is making headlines in UK after his son Daliso Chaponda appeared in Britain`s got talent comic show on Saturday and managed to drive the crowd crazy with jokes.

The comedian, Dalitso Chaponda aged 37 turned the patrons into uncontrollable laughter as he joked about Britain`s financial crisis and Single life.

Judge Amanda Holden pressed the golden buzzer to give the young Chaponda a place in the semifinals of the series.

Daliso, who moved to the UK ten years ago and lives in Manchester, caused less of a stink on BGT as he poked fun at life in Britain.

He said: “I heard a lot of people talking about the financial crisis.

“I’m from Africa — what are you talking about?

“You’ll have a financial crisis when this chav will have to walk five miles a day to get a bottle of WKD blue.”

His fellow judge, Alesha revealed she laughed so much from Chaponda`s jokes that her face was hurting.

However following the popular act of young Chaponda in  Britain’s Got Talent show, the UK media focused on his father, Dr George Chaponda.

Headlines and articles focused on his past role when he was Minister of Justice and attempted  to ban passing wind in public (farting).

The former Justice Minister, who met Madonna in 2010, also suggested officials be trained to deal with those farting as a way of promoting “public decency”.

Speaking about the bill in 2011, he asked: “Would you like to see people farting in public anywhere?

“Just go to the toilet when you feel like farting.

“Nature can be controlled.

“It becomes a nuisance if people fart anywhere.”

The SUN wrote about the same news with a funny headline saying, “LIKE FARTER, LIKE SON, BRITAIN`S GOT TALENT COMIC DALISO CHAPONDA IS THE SON OF MALAWIAN POLITICIAN WHO WANTS TO BAN FARTING”

Britain Got Talent unites personalities with different God-given gifts. The Malawian is therefore facing competition from people who specialise in other talents.

He has performed at major international events since the start of his career.