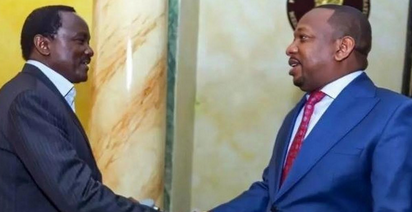 In his remarks, Kioni alleged that a report from a whistleblower had shown that the winner was the Azimio La Umoja One Kenya Alliance presidential candidate Raila Odinga who got 8.1 million votes against Ruto’s 5.9 million votes.

Kioni received a boost after the Azimio’s deputy presidential candidate Martha Karua and Wiper party leader Kalonzo Musyoka said that the report has vindicated them that the polls were not free and fair, calling for a forensic audit of IEBC servers, with leaders from the KKA wing saying that the Azimio camp are in denial that the country is past the August polls.

Speaking on Saturday in Machakos County, Former Nairobi Governor Mike Sonko said that the Azimio camp was dragging the country back at a time when Kenyans are focused on development and service delivery.

“Some leaders like Kioni are taking us back. Kenyans went to the ballot, did cast their votes, they were counted and Ruto was announced the winner. The Azimio leaders were not satisfied, they went to the Supreme Court, Ruto’s win was upheld, he was sworn in and received the instruments of power from Uhuru Kenyatta.”

“The Azimio people are now inciting Kenyans who have moved on by saying that their votes were stolen, yet they did not table that evidence at the Supreme Court.”

Sonko went on to urge Kalonzo to distance himself from such remarks, saying that he is a respectable leader who should now be working closely with Ruto for the sake of development across the three Ukambani counties.

Content created and supplied by: Ryndy (via Opera
News )