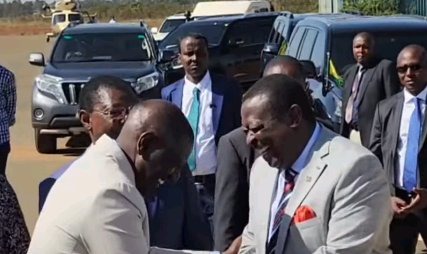 At the Kitale ASK Show Grounds on Saturday, Prime Cabinet Secretary Musalia Mudavadi welcomed President William Ruto while being joined by the Speaker of the National Assembly Moses Wetangula.

In a video, Ruto can be seen having a light moment with Musalia. The two leaders exchange a few words before bursting out into laughter together.

Governor George Natembeya of Trans Nzoia County and Governor Jonathan Bii, his counterpart from Uasin Gishu County, were among the other politicians who attended the event; however, the Deputy President Rigathi Gachagua was noticeably absent.

Although Musalia has stated on multiple occasions that there is no bad blood between the two of them, the decision by Gachagua to “skip” the function is likely to evoke conflicting responses from those who are familiar with the working relationship between the two parties. 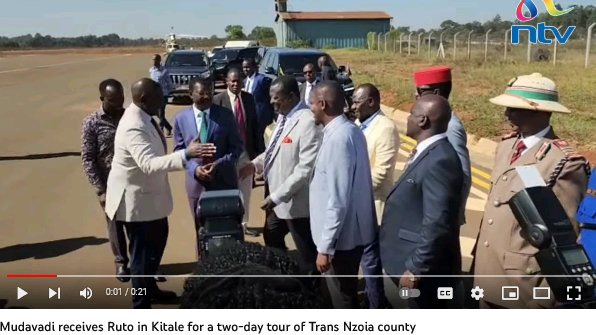 Ruto, Gachagua, and Musalia have all been seen attending separate events together and in a jovial mood. The most recent of these occasions took place in State House, where Ruto hosted the leadership of constitutional commissions and independent offices.

Some people also believe that both Musalia and Gachagua will engage in supremacy politics in their respective roles over the next few years. They believe this because each of them is working to unite their respective regions, the Western Region and the Mount Kenya Region, in an effort to increase their political muscle in advance of the general elections in 2027, in which Ruto will be running for reelection.

Content created and supplied by: Vivian123 (via Opera
News )