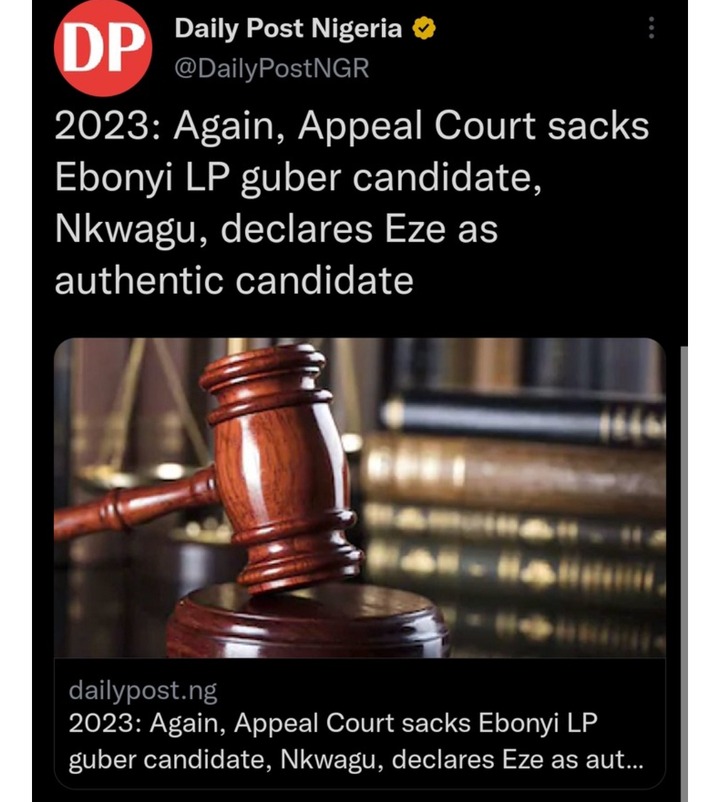 The Appeal Court sitting in Enugu State, has sacked the governorship candidate of Labour Party, LP, in Ebonyi State, Mr. Edward Nkwagu and installed one Splendor Oko Eze as the authentic candidate of the party.

Recall that Nkwagu and Eze had approached the Federal High Court sitting in Abakaliki to struggle on who flies the flag of Labour Party, LP, in the state as its authentic gubernatorial candidate.

Daily Post reports that the Federal High Court delivered by Justice Fatun Riman, had declared Splendor Eze Oko as the authentic candidate of the Labour Party, while Nkwagu who was not satisfied with the judgement, proceeded to the Appeal Court sitting in Enugu for further interpretation. 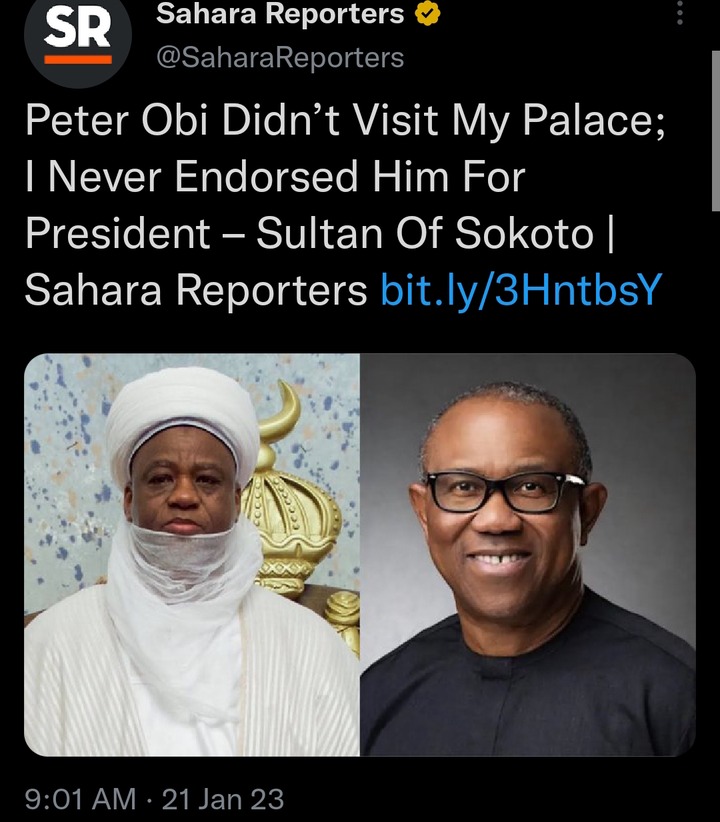 The Sultan of Sokoto, Muhammad Sa’ad Abubakar has denied claims that he endorsed the Labour Party’s presidential candidate, Peter Obi.

The Sultan, who confirmed this when he attended the National Peace Meeting with Nigeria’s presidential candidates in Abuja on Friday, described the reported endorsement of Obi as false.

A report had quoted Abubakar as saying Nigerians should hold him responsible if Obi failed to perform as president.

Reacting, the Sultan of Sokoto said such a report was false, while charging those behind it to produce evidence. 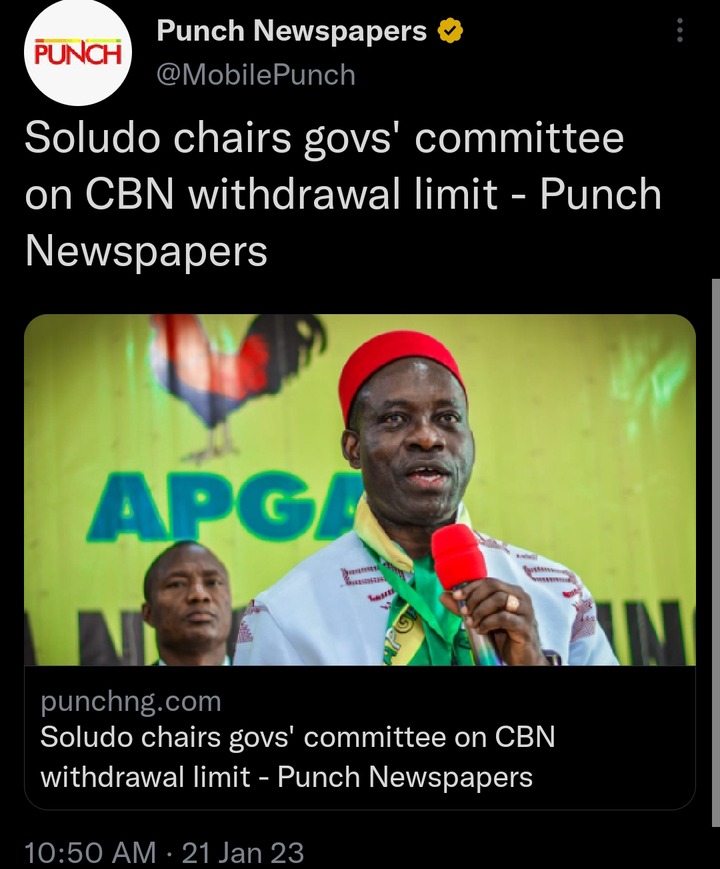 The 36 governors in Nigeria have resolved to set up a six-member committee led by the Anambra State, Governor Charles Soludo, to engage the Central Bank of Nigeria in addressing issues pertaining to the country’s monetary management and financial system.

The governors also resolved to collaborate with the CBN and the Nigerian Financial Intelligence Unit in advancing genuine objectives within the confines of Nigeria’s laws.

The governors arrived at the resolutions arising from its first meeting in 2023 held on Thursday, January 19, under the auspices of the Nigeria Governors’ Forum.

The NGF in a communiqué issued on Saturday signed by the its chairman, the Sokoto State Governor Aminu Tambuwal, noted that the recent NFIU advisory and guidelines on cash transactions were outside the NFIU’s legal remit and mandate. 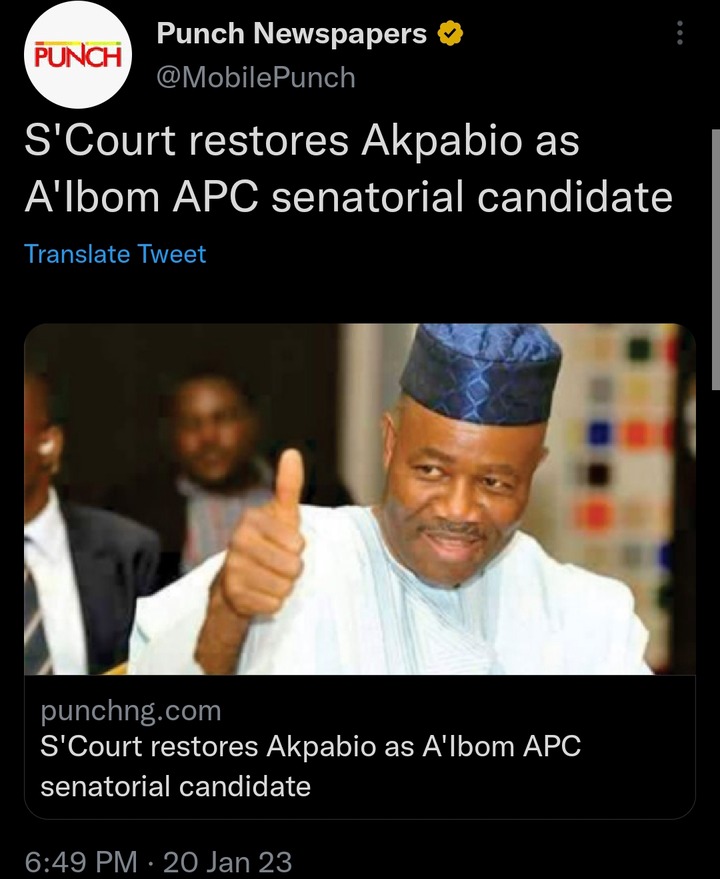 In a unanimous judgment delivered by Justice Ibrahim Saulawa, the apex court upheld the judgment of the Federal High Court in Abuja which in September last year granted verdict in favour of the immediate past minister of Niger Delta Affairs.

Saulawa after reviewing the arguments canvassed by Akpabio said that his appeal was meritorious and therefore was allowed.

The judgement was on an appeal filed by Akpabio challenging the judgement of the Court of Appeal Abuja, which set aside his victory at the Federal High Court, Abuja.

Content created and supplied by: TLucky (via Opera
News )