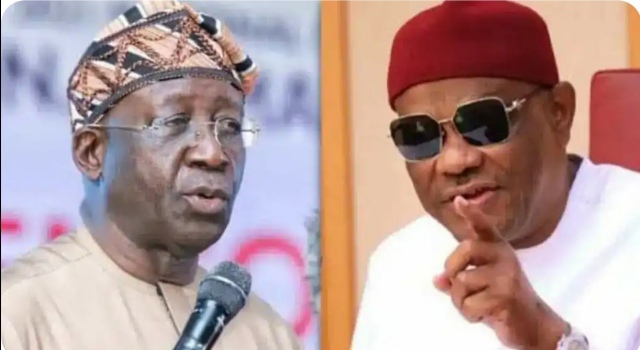 With just  few weeks to the 2023 general elections, the crisis rocking the Peoples Democratic Party (PDP) has taken another dimension as Rivers State governor, Nyesom Wike, on Saturday told the PDP National Chairman, Iyorchia Ayu that a battle line has just been drawn over the recent suspension of some party members.

Information Nigeria had reported earlier that the National Working Committee of the PDP in a statement signed by the PDP national publicity secretary, Debo Ologunagba, in Abuja, on Friday announced the suspension of some members including the son of former governor Ayo Fayose of Ekiti State, Oluwajomiloju Fayose and Chimaroke Nnamani, a former governor of Enugu State.

The PDP said they were suspended for anti-party activities, however, in his reaction Wike accused the PDP leadership of suspending party members loyal to the G-5 governors who have given conditions to support the party’s presidential candidate for 2023, Atiku Abubakar.

The G5 governor said the move is illegal, complete rubbish and will be challenged in court.

Wike said: “Your suspending people will not help you in any way. The battle line has been fully drawn. As I speak to you we will do everything legally possible to challenge any decision that we know is illegal.

“You are doing what will give you more headaches as far as this election is concerned. We are watching and we are waiting for you to announce more of my friends. When a man says you will not sleep, will he sleep too? Will Ayu sleep?”