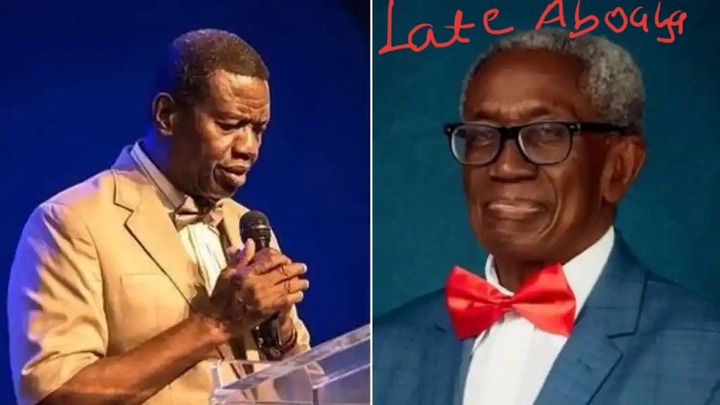 The Assistant General Overseer of the Redeemed Christian Church of God, RCCG, Prof. Folagbade Aboaba, was reported to had passed on earlier today after being battled through a brief illness. His death was contained in a statement made available to the public by the national chairman of the Nigeria Institute of Agricultural Engineers, prof. Folarin Alonge.

Alonge had described Aboaba as a father with immense sense of human dignity in his as scholar and great great academics. He wrote on the Institute website, “Prof Folagbade Olajide Aboaba was an Emeritus Professor of Agricultural Engineering at University of Ibadan and the Pioneering Dean of the Faculty of Technology (1976-1982). I was privileged to be taught by him at both undergraduate and Masters class.”

As he continues with the attributes in his honour, he stressed that Aboaba is a great father who has pursued his academic career to greater height and excellence both for his personal preference and the society at large. Among his works of life successes include, “He was the Executive Secretary of Committee of Vice Chancellors of Nigerian Universities (1992-1998). He was the founding Pro Chancellor of Redeemers University (2005-2013). He was the Chairman of Governing Council of Federal Institute of Industrial Research Oshodi (FIIRO), Lagos (1976-1979), among others.

Appreciating God for the life well spent as the icon died at the age of 90. May his gentle soul rest in perfect peace, amen.

Content created and supplied by: FlashUpdate2 (via Opera
News )