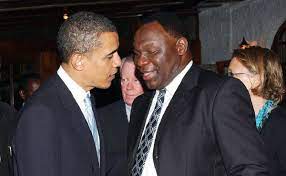 The Ethics and Anti-Corruption Commission (EACC) on Monday evening, 23 January 2023, released a series of top cases that are scheduled this week, a corruption case involving a former  Permanent Secretary in the Ministry of Information and Communication, who was once awarded the highly coveted and prestigious presidential Chief of the Burning Spear of Kenya (CBS) award for his distinguished services.

According to the highlights of matters coming up in court this week issued by EACC, Prof Bitange Ndemo, the former Permanent Secretary in the Ministry of Information and Communication, from 2005 to 2013 under the former Kenyan president Mwai Kibaki, is set to appear before the Milimani Anti-Corruption Court on 27 January 2023, where corruption case will be mentioned. 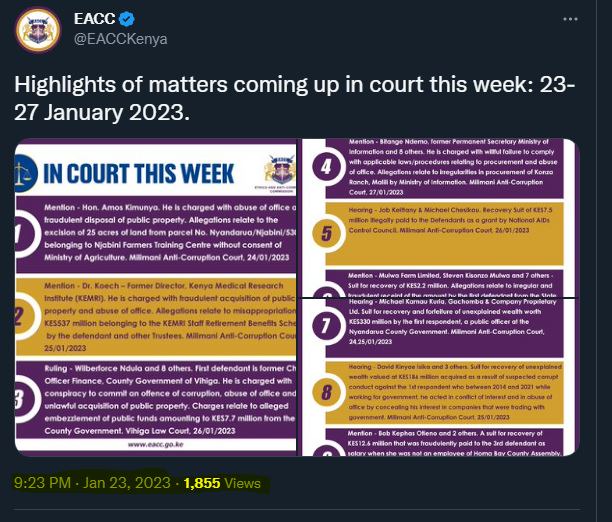 The former PS and 8 others are charged with willful failure to comply with applicable laws and procedures relating to procurement and abuse of office.

The allegations relate to irregularities in the procurement of Konza Ranch, Malili by the Ministry of Information when he was holding the crucial office. The case will be mentioned at the Milimani Anti-Corruption Court on .27/01/2023.

For those who do not know him, Bitange Ndemo was one of the top performers in Kibaki’s government to the level of getting rewarded by the President. 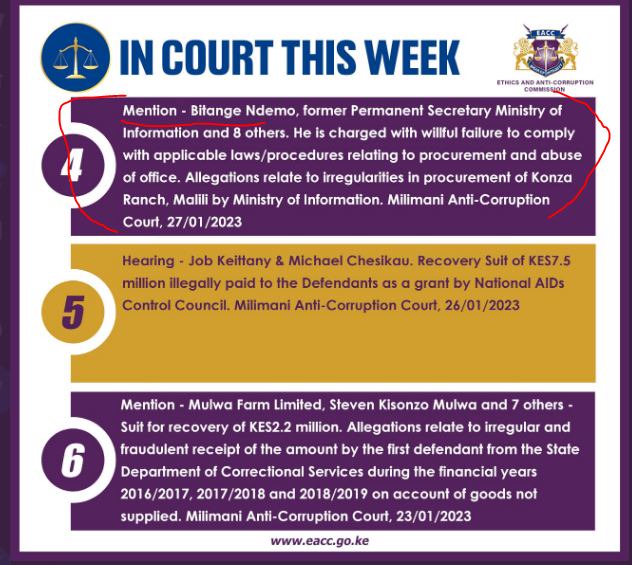 He is regarded as one of the key people who oversaw a transformation in the ICT Sector in Kenya.

As the PS, Kenya was able to install undersea submarine internet cables, he also played a key role in the reduction in mobile termination rates (MTRs), which is, a charge applied by a public telecommunications service provider for terminating a call.

He is currently the Kenyan ambassador to Belgium.

It is not yet clear if he will be in court during the mention of the case.

Content created and supplied by: @DigitalReporter (via Opera
News )