The Public Relations officer of the Delta State Police Command, DSP Bright Edafe, has recently shared a safety tip to Nigerians via his social media page.

According to the Police officer, he said that people should never allow other people to put their sim cards in their phones because it could cause trouble for the owner of the phone should the sim card is used for a crime.

The Police officer pointed that if such sim card is used for a criminal activity, the owner of the phone used in such situation may also be investigated and it could be hard for such person to prove his or her innocence in this case.

In his words, he said: “Please, don’t allow strangers to insert their Sim cards on your phone for whatever reason. Should they commit any crime with that Sim card, investigation might eventually get to you, and it may be very difficult to exonerate yourself. Better safe than sorry.”

The tip tweet stirred reactions as many social media users appreciated the Police officer for sharing such useful tip to the citizens. ﻿ 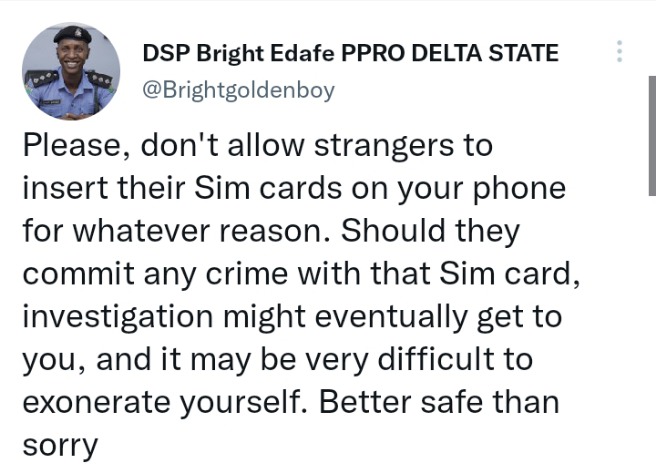 Content created and supplied by: Eltosdelights (via Opera
News )