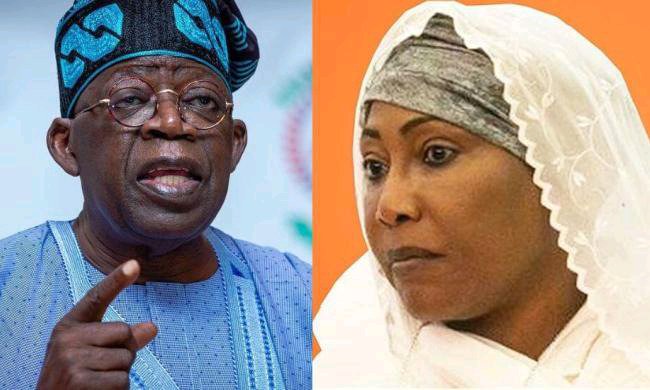 Obtainable news sources claim that Najatu Muhammad, a former director of the civil society division of the All Progressives Congress Presidential Campaign Council (APC-PCC), has given an explanation for why she ditched Bola Tinubu, the nominee of the ruling party, for the presidency.

In addition, she claimed that Tinubu is psychologically unable to serve as president of Nigeria in addition to being physically unfit.

In one of her remarks, Najatu Muhammad also claimed, “I sat with him for two hours in London; when you talk about green, he will give you an answer of red; he can’t even decipher; he has very terrible dementia; I believe he has Alzheimer’s since he cannot even hold a cup of tea.”

“Due to Tinubu’s lies, we had to take the microphone away from him when he was in Yola.” “We need a capable leader, not someone whose health situation is nothing to write about, when you talk about leading more than 200 million people,”

Many people are unaware of the fact that Tinubu has no positive ideas for Nigerians in the North. When I questioned him about how he planned to address the issues of insecurity, terrorism, unemployment, out-of-school youth, agriculture, and kidnappings in the North, that’s when it all changed. He told me he had nothing to offer them in response.

According to Najatu, “Pray that Nigerians, especially Northerners, will exercise wisdom this time around and refrain from voting for Tinubu because he has no plans to solve the issues they are facing.”