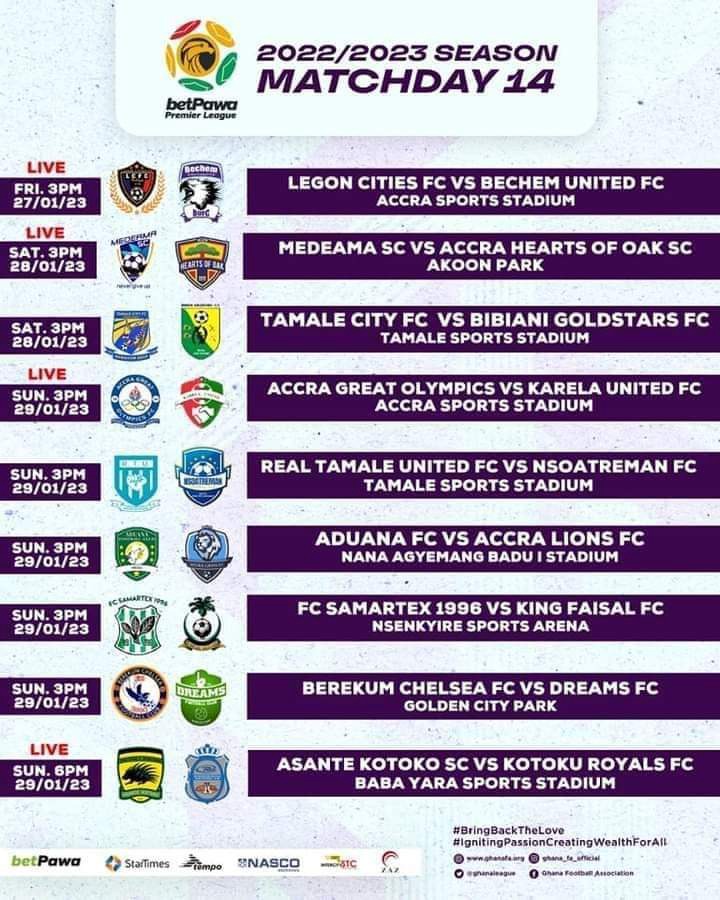 Reigning champions Asante Kotoko and leaders Aduana FC will be at home this weekend with Hearts of Oak on the road at Tarkwa as the betPawa Premier League action returns at the weekend.

This Matchday 14 fixtures will begin on Friday when Legon Cities hosts Bechem United at the Accra Sports Stadium.

On Saturday, Accra Hearts of Oak will trek to the Akoon Community Park, Tarkwa to face the might of Medeama SC at their dreaded home venue.

Also on Saturday, Tamale City FC will be home to Bibiani Gold Stars at the Aliu Mahama Sports Stadium, Tamale in the Northern region.

Six matches will be played on Sunday to bring the weekend’s round of matches to a close.

Champions Asante Kotoko will be home to Kotoku Royals at the Baba Yara Stadium in, Kumasi in an encounter that will be played under floodlights.

Aduana FC who lead the log by two points, will welcome second placed Accra Lions to the Nana Agyeman Badu I Park, Dormaa-Ahenkro in a top-of-the-table clash.

Accra Great Olympics will welcome Karela United to the capital in a game that will be played at the Accra Sports Stadium.

Nsoatreman FC will be on the road up north to play against Real Tamale United at the Aliu Mahama Sports Stadium.

Berekum Chelsea will be home to In-form Dreams FC at the Golden City Park, Berekum also on Sunday.

Content created and supplied by: KONTOMIRE (via Opera
News )