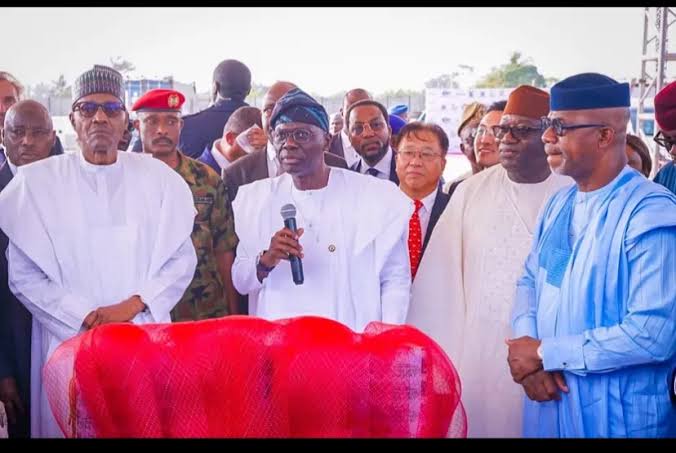 Yesterday, President Muhammadu Buhari officiated at the historic opening of the Lekki Deep Sea Port in Ibeju-Lekki, Lagos State. He also saw the first shipment of cargo from the CMA CGM Mozart arrive at the quay.

The federal government, acting through the Nigerian Ports Authority (NPA), the Lagos State Government, the Tolarams Group (owners of the Lagos Free Zone), and China Harbour Engineering Company are partners in the project, which has a total investment of more than $1.5 billion.

At the ceremony, Buhari was accompanied by the governor of Lagos State, Babajide Sanwo-Olu, as well as the minister of transportation, Muazu Sambo, the Chinese ambassador to Nigeria, Ciu Jianchun, other senior government officials, and traditional chieftains.

Sanwo-Olu addressed the crowd, saying, “Mr. President, we are glad this is happening at your time.” Both the beginning and the end occurred in your time.

We are happy to announce that in your lifetime, something new has begun in this nation and will lead to the creation of thousands of direct and indirect jobs.

Sambo pointed out that the president’s prompt response to all demands from the Federal Ministry of Transportation about the Lekki Deep Seaport allowed for the project’s official opening.

“The very fact that the letter of intent between the proponents of Lekki Deep Seaport and its financial partners was signed as recently as April 2019 and by January 2023 the wide-ranging impact project is already being commissioned is a testament to the tenacity of purpose of the Federal Ministry of Transportation through the Nigerian Ports Authority,” the minister declared.

With seaports falling under the Exclusive Legislative List, Sambo explained, “The Nigerian Ports Authority’s provision of a sinking fund for the federal government’s equity contribution to Lekki Deep Seaport gave this project the necessary statutory cover and financial guarantee in accordance with the law.”

The accomplishment of a deep-sea port project in a record-breaking 45 months demonstrates the value of rigorous ministerial control, stringent regulatory oversight, and strong presidential support.

As one of the great achievements of the Buhari government, the project will, according to Sambo, result in the creation of approximately 170,000 jobs once operations get underway.

Jianchun stated in his message of goodwill that the historic gateway project, which was created cooperatively by five parties from four nations, was an appropriate illustration of an effective business strategy.

“This project is a joint venture between China, Nigeria, and Singapore and is managed by a French business,” the Chinese ambassador to Nigeria said. Using the “five parties from four nations” paradigm, all parties can benefit from their collective knowledge and strength.

He promised that China would advocate for the corporate strategy of seeking a win-win result, particularly in support of Nigeria’s growth, development, and progress.

The government doesn’t have to be concerned about debt concerns or the availability of assurances, he continued. Additionally, it demonstrates the reliability of Nigeria’s investment environment. We have every reason to believe that Nigeria will continue to develop.

Content created and supplied by: Mediablog (via Opera
News )