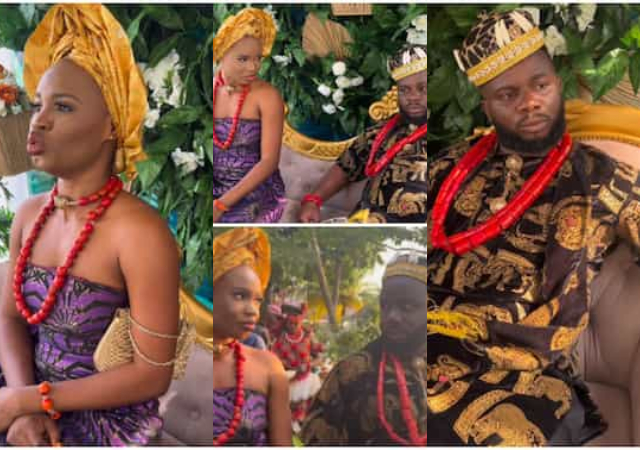 Popular Nigerian skitmakers, Sabinus and Tomama, have caused a buzz on social media over their ‘traditional marriage’.

Both of the social media comedians were spotted getting married traditionally in a funny skit video that had netizens laughing.

In the clips posted online, the ‘couple’ was seen seriously frowning at each other during the ‘wedding’ proceedings and many wondered if they were forced to ‘tie the knot’.

However, in the caption of the video shared on Tomama’s page, the comedienne noted that her marriage will last. She wrote:

Sabinus however seemed to disagree, According to him, the ‘marriage’ will only last for two days.

He wrote: “This marriage no go reach 2days @datwarrigirl You better no near my house ”

Read some of their comments below:

andrea__aries: ” wat is this na by force to marry.”

sultrycollections__: “Them no suppose bless this marriage because e no go last Make una no waste blessing.” aromaarena: “Waste of Attire and

.chgz: “This marriage no go last pass the wedding ceremony”