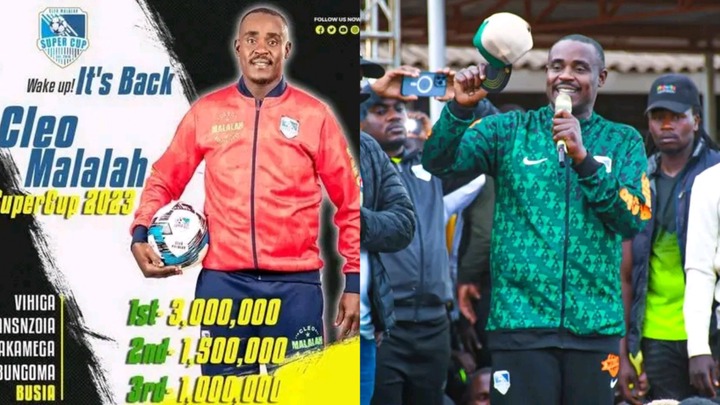 Former Kakamega senator Cleophas Malala has announced the return of soccer tournament dubbed as “Cleo Malala Super Cup” that will feature all Western region counties in bid to enhance cohesiveness, inclusivity and tap local talents into international platforms by providing avenue for youths to showcase their skills and talents through tournaments.

The five counties expected to participate in soccer tournament include; Trans-Nzioa, Kakamega, Vihiga, Busia and Bungoma from Mulembe region.

The former legislator informed that the winner of Cleo Malala Super Cup Football Tournament will bag cash prize ksh3,000,000, the runner up will on the other hand walk away with ksh1.5M, while the second runners up with take home ksh1M.

“Talent has no boundaries and young leaders in the region, we pledge to dedicate every resource at our disposal in promoting talent in Mulembe Nation. The Cleo Supper Cup, Mulembe Edition seeks to drive the growth of sports in our region” stated Cleophas Malala.

He added that the move to include the five counties in Western region as opposed to the norm of only Kakamega residents participating in the tournament was informed by the ploy to enhance region inclusivity especially in sports that brings together 38 constituencies.

“We want to expand our territories. We are going to expand the jurisdiction where we have been operating from Kakamega county. This time round, we want to play the clear Malala Supper Cup in the five counties, bringing together 38 constituencies of Western region, that strikes all the way from Trans-Nzioa, Vihiga, Kakamega, Bungoma to Busia” added Malala.

He also noted that he seeks to organise coaching clinics to offer training services to team head coaches and launch mentorship programs for all the team captains.

“Ww are going to organise coaching clinics to train our coaches and mentorship programs of all the captains” he noted.

Content created and supplied by: OumaAllan (via Opera
News )