The spokesperson for the Tinubu/Shettima Presidential Campaign Council, Festus Keyamo has taken to his verified Twitter page to react to Dino Melaye’s ‘Emi Lokan’ mockery dance.

A video circulated on social media recently where Dino Melaye was seen dancing on the stage and allegedly falling on the floor to mock the presidential candidate of the All Progressive Congress, APC, Bola Ahmed Tinubu.

While reacting to the mockery video, Keyamo, took to his microblogging, Twitter to say during the 2008 US election, Obama’s rival, Sen. McCain had a deformity in one hand. With that, Keyamo said despite his deformity, Obama’s team showed him respect & never mocked him for it.

However, he said here in Nigeria, a VP candidate laughs as a clown falls on stage to mock another candidate. Keyamo made it known that it was a height of imbecility.

Keyamo concluded his statement by saying they owe Nigerians an apology for that mockery.

“Obama’s rival in 2008 US election, Sen. McCain had a deformity in one hand. Obama’s team showed him respect & NEVER mocked him for it. But here, a VP candidate laughs as a clown falls on stage to mock another candidate. It’s the height of imbecility. They owe Nigerians an apology.” 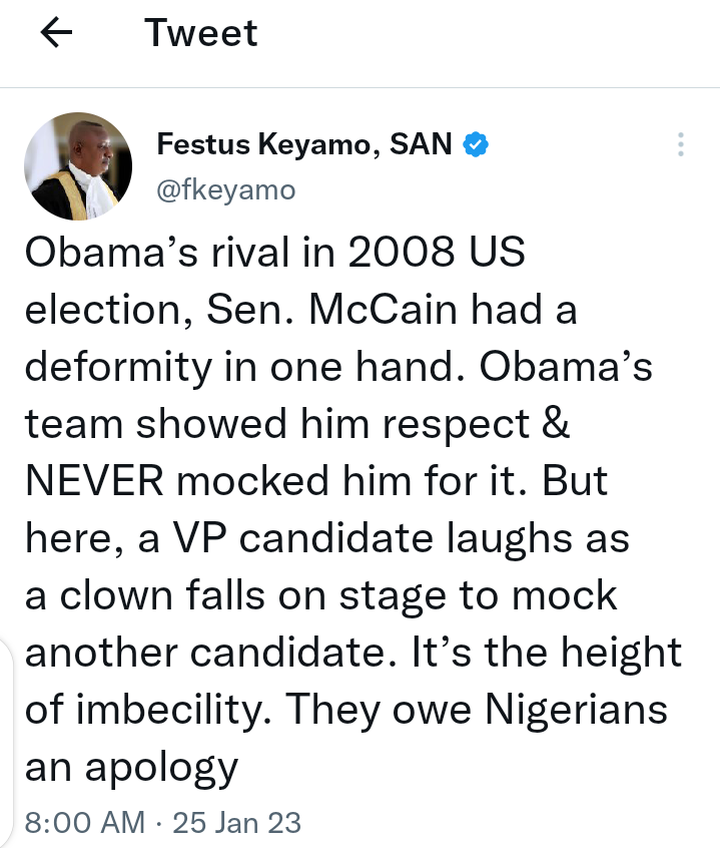 Watch the video by clicking the link below:

What’s your take on this? Kindly drop your thoughts and opinions in the comment section below.

Content created and supplied by: Naija-hub-news (via Opera
News )