“If They Say No Fuel, We’ll Trek To Polling Unit, Nothing Can Stop My Victory” – Tinubu Throws Jibe At FG 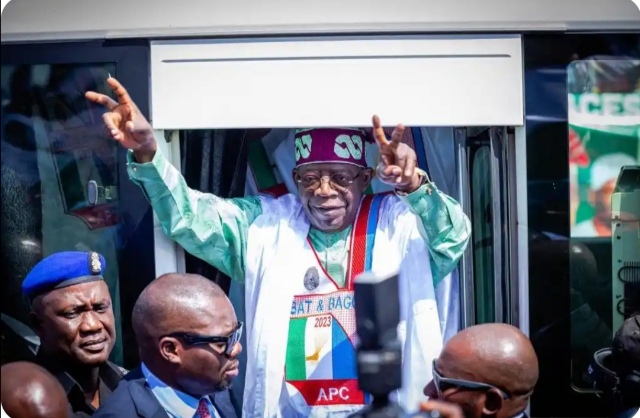 Bola Ahmed Tinubu, the presidential candidate of the All Progressives Congress (APC), has expressed confidence about winning the 2023 election, come what may.

The former Lagos State governor, who made the submission on Wednesday at the Moshood Abiola Stadium in Abeokuta, Ogun State during his party’s campaign rally hinted that some people may be trying to sabotage the forthcoming polls.

According to him, irregardless of the various plots, he would emerge victorious at the polls.

Tinubu identified the fuel scarcity and the recent change (including scarcity) of the naira notes as some of the ploys some persons may be planning to use against the 2023 polls.

READ ALSO: “Vote For My Father Because I Married An Igbo Lady” – Tinubu’s Son Appeals To Anambra Residents

He said: “Let fuel be expensive, only they know where they keep it. Keep petrol, keep the naira, we will vote and be elected. You may change the ink of naira notes. What you expect will not happen.

“They said petrol will rise to N200/litre and N500/litre, let your mind be at rest. They don’t want these forthcoming elections to hold. They want to scatter it but that won’t be possible.

“They thought they could cause trouble; they sabotaged fuel but with or without fuel, with or without motorcycles and tricycles, we will vote and win. This is a superior revolution.”

The ‘Emi Lokan’ candidate however called on Nigerians to ensure they get their Permanent Voters Cards (PVC) and vote during the election.

“We will take over government through our PVCs. Even if they say there is no fuel, we will trek to the polling units,” he added.

The post “If They Say No Fuel, We’ll Trek To Polling Unit, Nothing Can Stop My Victory” – Tinubu Throws Jibe At FG appeared first on Information Nigeria.