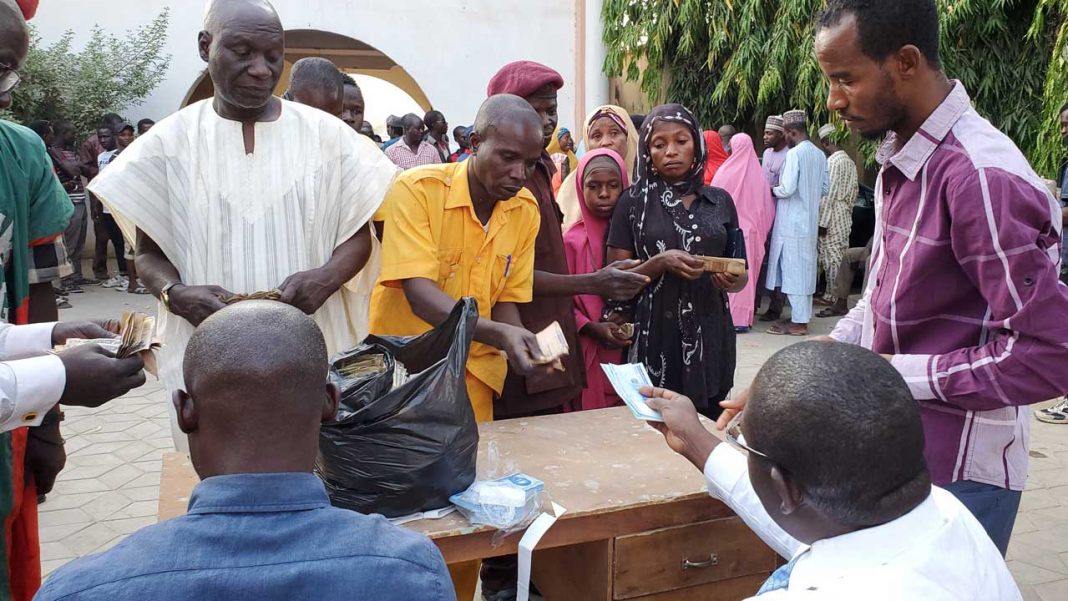 With only just five working days left to phasing out old N1,000, N500 and N200 notes, anxious citizens are at their wits’ end over who blinks first, as the Central Bank of Nigeria (CBN) remains defiant, insisting there is no going back on the January 31 deadline despite a motion by the two chambers of the National Assembly, asking the apex bank to extend the deadline for acceptance of the old naira notes.

The lawmakers’ resolution is coming after the Nigeria Governors’ Forum (NGF), Bank Customers Association of Nigeria (BCAN) and a host of other stakeholders have expressed concerns and made appeals for CBN to extend the period for the currency swap as well as review of the cashless policy.

The House of Representatives and the Senate in separate resolutions, yesterday, asked CBN to extend the deadline by six months till July 31.

The decision of the House to ask for the extension followed a motion of urgent public importance moved by Sada Soli (APC, Katsina) during plenary. Moving the motion, Soli said banking and other financial institutions are struggling to cope with the rush by citizens to change their old currencies to new notes, just as the shortage of new notes is creating panic.

He informed his colleagues that traders in Katsina State have started rejecting the old notes.

Speaking in support of the motion, Ahmed Jaha (APC, Borno), said CBN has been making efforts in his state to swap the old notes for new ones, however, the efforts are not enough to meet the deadline, just as activities of Boko Haram insurgents have shut down banking operations in most parts of Borno.

In his intervention, Speaker of the House, Femi Gbajabiamila, said the House needs to interface with the heads of commercial banks to understand the real situation.

Consequently, the House resolved to set up an ad-hoc committee chaired by the majority leader, Alhassan Doguwa (APC, Kano), to interface with the banks today and subsequently meet with CBN.

At the upper chamber, the Senate called for the extension of the deadline following the adoption of a motion moved by Sodiq Umar (APC, Kwara), who argued that the policy is affecting the people negatively.

Speaking in support of the motion, Abiodun Olujimi (PDP, Ekiti), stated that most Nigerians have not got the opportunity to touch the new notes, adding that the timeline for the implementation of the policy is too short.

Also, former Senate Leader, Ali Ndume (APC, Borno) lamented the absence of the newly redesigned notes in circulation, saying that as a serving member of the upper legislative chamber, he has not seen the new notes.

“Even on Friday, I made withdrawal from the bank, and they gave me old notes. And then surprisingly, now I heard that in some places now, they are rejecting old notes. In other words, the CBN deadline has actually been implemented in remote places over fear of people losing their money. This panic is going to cause economic chaos.”

On the chaos already on the streets, Bayo Olorunpoda, a media executive, said yesterday: “I visited five banks today and none of the ATMs dispensed cash. The explanation was that banks didn’t want to load old naira notes in obedience to CBN instruction, yet they didn’t have enough new notes. Furthermore, most ATMs dispense N500 and N1,000 notes, either old or new. How will CBN ensure the circulation of the new N200 notes, which will be in high demand for cash transactions, when it doesn’t dispense from the ATM?”

WHILE the lawmakers were deliberating on the motion, the CBN Governor, Godwin Emefiele, announced that the bank would not go back on the decision. He made the announcement after the Monetary Policy Committee (MPC) meeting in Abuja.

Speaking on the new notes, Emefiele claimed that kidnapping and ransom-taking incidents have reduced since the three banknotes were redesigned. He also argued that the time given for the swap of the old naira notes with new ones was enough for Nigerians to get the new notes from commercial banks.

“I must say here that unfortunately, I don’t have good news for those who feel that we should shift the deadline. My apologies.

“The reason is because we feel 100 days should be enough for those who have the old currency to deposit the money in the banks. And we took every measure to ensure that all the banks were open to receive all old currencies. 100 days, we believe, is more than adequate.”

This is even as indications emerged that over 50 per cent of Nigeria’s unbanked population may lose their cash savings following CBN’s requirement that old notes could only be exchanged through an existing bank account.

Inclusion for all Initiative, an advocacy programme that seeks financial and economic inclusion for Nigeria’s poorest and most vulnerable communities, stated this in a Report titled: ‘Naira Redesign Impact.’

As part of the process to replace the old notes, CBN directed that cash can only be accepted from customers with bank accounts and full Know Your Customer (KYC), and cash must only be paid into the customer’s account.

However, findings by the organisation indicated that about 20.1 per cent of the 38 million unbanked Nigerians do not possess identity documents (valid and bank accepted means of identification), while 83.2 per cent and 85 per cent of the same population lack proof of address and documentation for tier-3 bank accounts respectively.

The research report also indicated that National Identity Number (NIN) ownership among those who live below the poverty line is only 46 per cent.

Speaking on the findings, Chinasa Collins-Ogbuo, Head, Inclusion for all Initiative, said: “54.2 per cent of Nigeria’s unbanked poor indicated their preference for saving their money in a safe place at home or carrying it around, indicating that more than 50 per cent of this segment of the population could lose their savings if they are unable to exchange old notes for new notes.”

His words: “The insistence of the CBN Governor on the January 31 deadline is an indication that there is an ulterior motive for making notes that are currently in circulation illegal from February 1.”

He submitted that considering that eight local councils in Borno are completely cut off from the banking system or digital financial infrastructure and that Yobe State has less than 400 base transceiver stations for telephone and internet signals, that should sway CBN to phase the introduction of the new naira notes over a period of 24 months, while also deepening the open banking infrastructure to raise the number of BVN holders from its current 63 million, representing 44.5 per cent of the banked population.

An economic analyst, who is also the Lead Director of the Centre for Social Justice (CSJ), Eze Onyekpere, said the CBN governor is seeming to be insensitive to the yearnings of Nigerians with his insistence on no extension, if seven days to the deadline, banks are still dispensing the old notes.

He, therefore, sought a one-year extension deadline by the CBN for all Nigerians, especially those in remote and unbanked areas to exchange their old notes for the new ones, citing the example of the United Kingdom, which unveiled its new notes on December 20, 2022 but gave the deadline of 2024 for banks to still swap old pound sterling for the new ones.

But the Director, Payment System Management Department of CBN, Alhaji Musa Jimoh, has refuted claims that banks were being starved of new naira notes.

Jimoh was in Plateau State, yesterday, to monitor the activities of commercial banks on compliance with the CBN directive that all banks’ ATMs should dispense new notes.

Addressing a press conference yesterday in Jos, he urged media practitioners to help monitor the banks to report to CBN any bank that still dispenses old notes.

According to Jimoh, any ATM of any bank that dispenses old notes will be shut down summarily as there had been complaints that banks are not complying but are still issuing the old notes.

“No bank should dispense old notes. You should be on the alert and let me know immediately because I am representing the CBN Governor here,” he stated.

The governor expressed surprise that such conversations could come up considering the size of the banking system, noting that the said amount is far bigger than the total asset of the entire banking industry in the country. The apex bank boss revealed that N370.89 billion has been collected between 2016 to date.

“So, when it became a story everywhere, we went into our records, told Banking Supervision, Banking Payment System to go into the system and rake out the total amount that has been collected on stamp duty from 2016 to date.

“The report that we have in CBN is that Stamp Duty collected to date is N370,886,315,505.28. This is public accounts. We owe Nigeria public accountability. Out of that, the Federal Inland Revenue or the Ministry of Finance has disbursed to Federation Accounts Allocation Committee (FAAC) N226,451,720,158.88.

“And the balance with the account of CBN is N144,234,535,346.40. We did calculations and the highest collection from the oldest bank in Nigeria, First Bank, collected N71.6 billion in seven years. I truly don’t know where N89 trillion is?”

The reaction is in response to a member of the House of Representatives, Muhammed Kazaure (APC, Jigawa), who claimed that Emefiele siphoned the sum of N89 trillion, which had allegedly accrued to the federation.

Kazaure alleged last December that about N89.1 trillion realised from the collection of N50 Stamp Duty and bank charges from all transactions valued above N2,000 between 2017 and 2020 kept with the CBN, was missing.

Kazaure also claimed that it was discovered that the CBN was charging another N100 from every transaction above N5,000, the proceeds of which were going into private accounts, with the apex bank and the 27 commercial banks in the country sharing in the ratio 60:40.

But Emefiele said: “The truth is that CBN will not be joined in any argument with anybody because it will overheat the system. But it is important for me to say that Stamp Duty is the revenue that needs to be collected from people who are conducting electronic transfers. It is about public accounts and accountability. It beats our imagination that those kinds of arguments can come.”

The CBN boss also explained why it has continued to extend overdraft credits to the Federal Government via a policy termed ‘Ways and Means (W&M).’ Recall that the Ways and Means figures has more than doubled since 2015, hitting an all-time high of N22.8 trillion as of September 2022 .

Emefiele explained that the reason the apex bank continues to support the government through Ways and Means is part of its responsibility as the lender of last resort to the country.

Emefiele cited a drop in oil prices, two recessions, and the COVID-19 pandemic as a combination of economic challenges that decimated the revenues of the government.

He also stated that what they did is not new claiming other central banks around the world do similar intervention when faced with an economic crisis.