Ortom Accuses APC of Conspiring With Herdsmen to Destabilize Benue 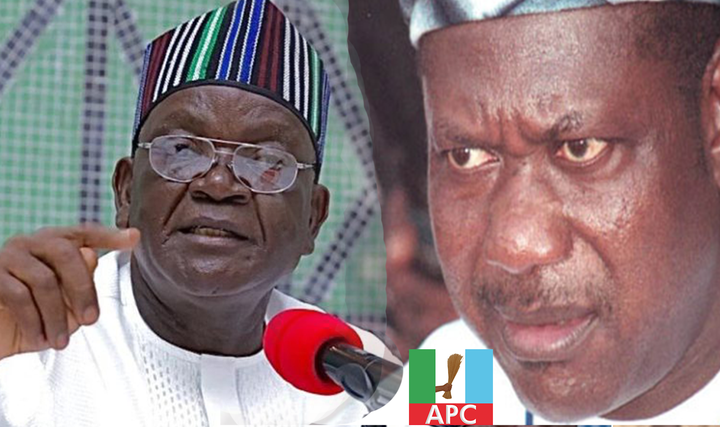 Benue State Governor, Samuel Ortom, has accused the Benue All Progressives Congress, APC, of colluding with armed Fulani herdsmen who attack communities in the state.

Ortom said the armed herders operate like the party’s militia wing in the state.

The Governor speaking through his Special Adviser on Media and Publicity, Terver Akase, said: “APC in Benue State has again proven that it has no value for human lives, and as long as they get power, Benue can go up in flames. A political party that turns to accuse the people of the state it hopes to govern lacks humanity and the conscience to lead.”

The statement reads: “We read the text of a press conference the Benue State Chairman of All Progressives Congress, APC and others addressed yesterday January 24, 2023 in Makurdi in which they leveled all manner of accusations on Governor Samuel Ortom whom they said has been using the state Livestock Guards to rustle Fulani cattle, among several other mischievous allegations.

“By their outing, the APC in Benue State have left no one in doubt that they are working closely with those who invade communities of the state and attack innocent people. This is not the first time that leaders of the party have come out to take sides with killer herders. The APC in Benue State has often accused Benue people of attacking and killing themselves. Not too long ago, the sacked governorship candidate of the party re-echoed the accusation which the party’s leader first made four years ago absolving herdsmen of any responsibility in the series of attacks on Benue people. It is clear that leader of APC in Benue State, Senator George Akume was behind the said press conference which was a tactical way of diverting attention from the removal of his puppet governorship candidate by the Court of Appeal.

“As far as the APC in Benue State is concerned, the lives of cows are more valuable than human lives. This is why in the said press statement, their emphasis was on cattle rustling as they frantically tried to justify why the Benue State Open Grazing Prohibition and Ranches Establishment Law should be reviewed to grant easy passage and access to Fulani herders with their animals to lands across the state. The APC’s line of reasoning resonates with the thinking of Fulani pastoralists such as Miyetti Allah who insist that until the law is repealed, they will not stop sponsoring attacks on the state.

“The APC in Benue State has again proven that it has no value for human lives, and as long as they get power, Benue can go up in flames. A political party that turns to accuse the people of the state it hopes to govern lacks humanity and the conscience to lead.

“APC has never condemned the genocide Fulani herders have visited on Benue State in nearly a decade. Leaders of the party are often quick to jump to the defense of the killer herders whenever people are attacked in parts of the state with the armed herders operating like a militia wing of the party. The opposition party has never shown empathy towards victims of the humanitarian crisis in the state. There is no evidence that they have taken relief materials to any of the IDP camps even once in the last five years. The only time a delegation of the party visited the camp located in Daudu was before the 2019 elections with the sole purpose of campaigning for votes.

“The timing of the APC press conference coming barely 24 hours after the Appeal Court judgment which nullified their phony governorship primary election was calculated to divert attention from the devastating situation that the party does not have a gubernatorial candidate at the moment. But we expected the APC to direct their frustration to the appropriate quarters not on Governor Ortom. The Governor did not advise them to conduct what their appeal panel described as yahoo yahoo primary election and he was neither a member of the panel of justices that nullified the fraud called nomination.

“Though we cannot stop the APC in Benue from further conspiracy with enemies of the state, we must reiterate that their plans will always fail. The Open Grazing Prohibition and Ranches Establishment Law and the Livestock Guards which the APC and their herder allies desperately want to see scrapped have come to stay. Anyone who wants to rear cattle in Benue State must do so within the confines of ranches and be prepared to face the long arm of the law in the event of any breaches.

“We reassure the people of the state that Governor Samuel Ortom remains committed to the security of his people and no amount of blackmail or smear campaign from the opposition can make him compromise.”

Content created and supplied by: benuemediaoffice (via Opera
News )