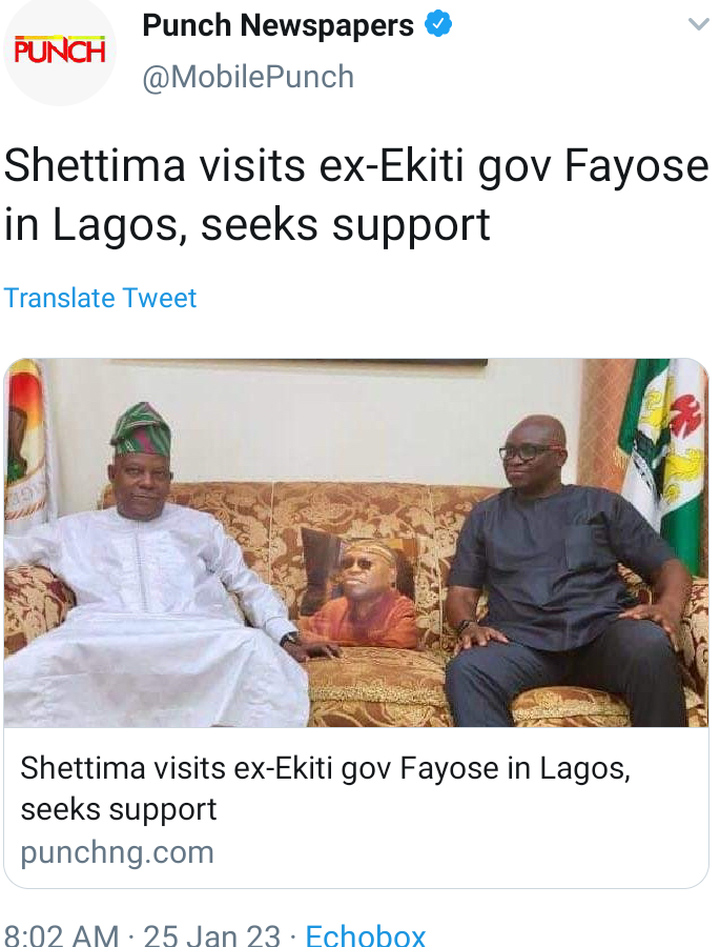 The vice presidential candidate of the All Progressives Congress, Senator Kashim Shertima, on Tuesday, visited the former governor of Ekiti State, Ayodele Fayose, in his Lagos residence to seek support ahead of the forthcoming February 25 presidential election in the country.

Shettima made his visitation known through a post he made on his Facebook wall adding pictures of Fayose and himself in his house.

He wrote, “I paid my brother, the former governor of Ekiti State, H.E Ayodele Peter Fayose a visit.

“The great Oshoko welcomed us with warmth and rare camaraderie. Thank you for your support and God bless you for hosting me and my team,” he added. 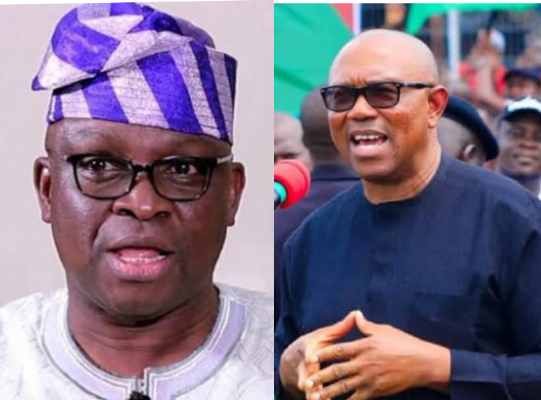 Farmers in Anambra State have endorsed the presidential candidate of the Labour Party (LP), in the forthcoming general election, Mr Peter Obi and his running-mate, Dr Yusuf Baba-Ahmed Datti. 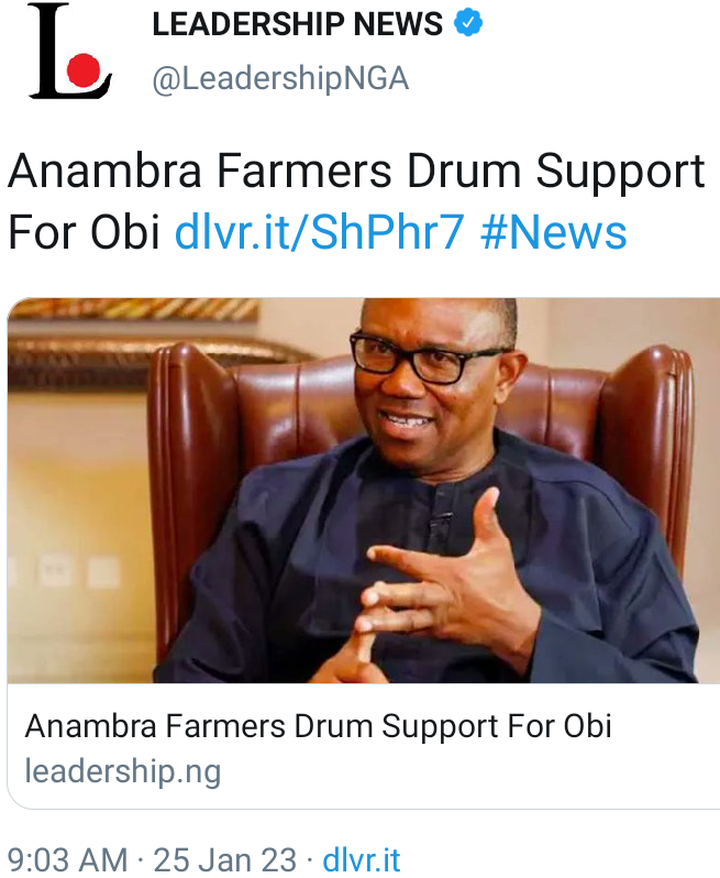 The farmers who operate under the umbrella, Innoscofarms and allied farmers, have also sent their members to other South East states, Abia, Ebonyi, Enugu and Imo to sensitise and mobilise farmers to support the LP presidential candidate.

The coordinator of the group and chief executive officer of Innoscofarms and Agro Company Nigeria Limited , Mr Chinwuba Obiora told LEADERSHIP that when Peter Obi was governor of Anambra State, his administration gave boost to local rice farming, processing and consumption. 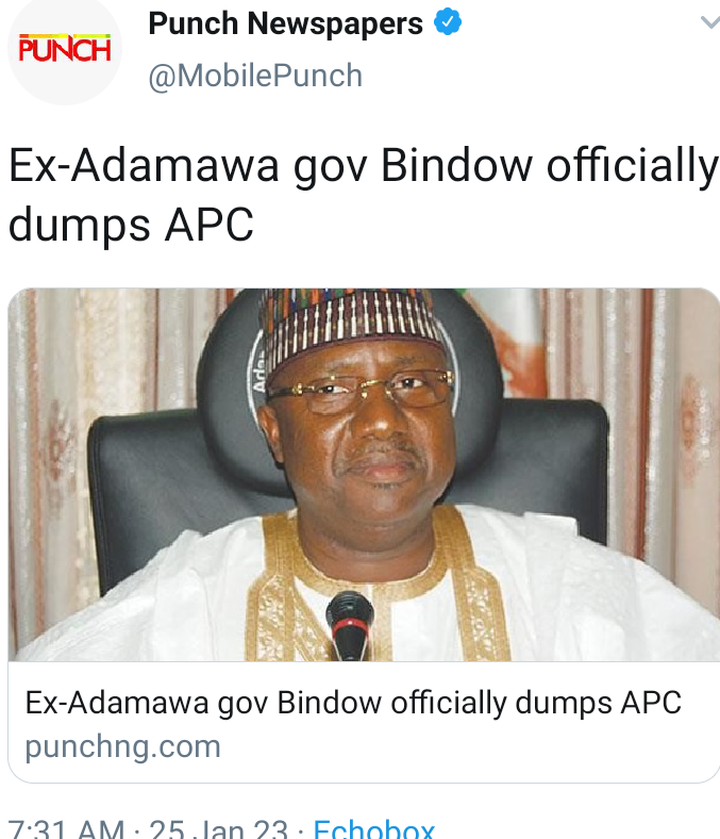 The former governor cited unresolved party crisis as his reason for leaving the party.

Bindow said the unresolved crisis of the Adamawa State Chapter of the APC made him to tender his resignation letter and therefore ceases to be a member of the APC.

Bindow’s formal letter, dated January 20, 2023, was addressed to the chairman of the APC in his Kolere ward, Mubi North Local Government Area of the state.

Nigeria to spend N6trn on fuel subsidy this year — El-Rufai 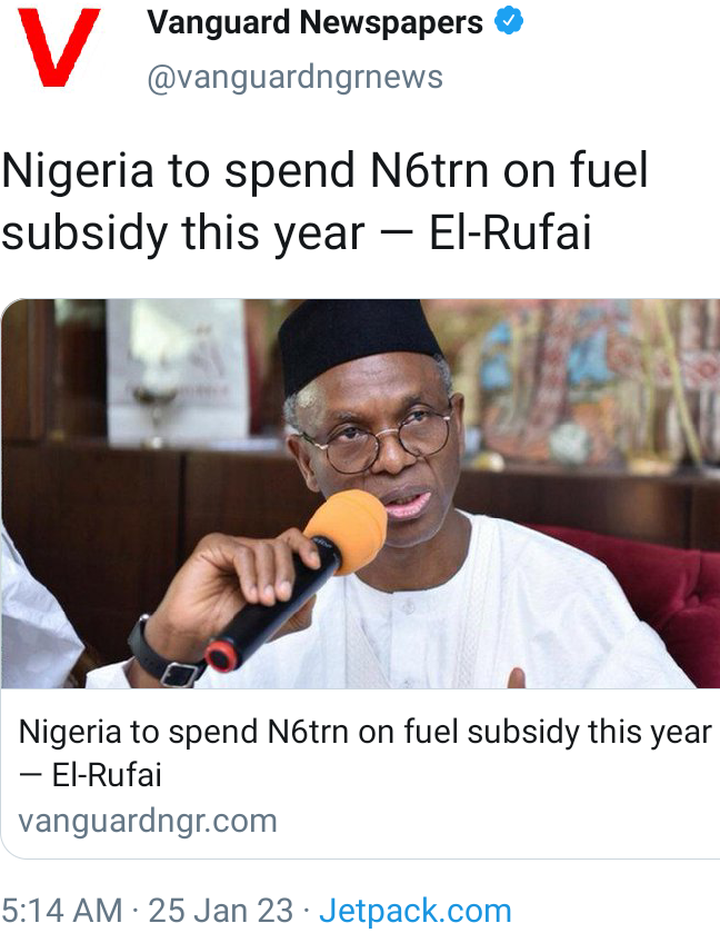 The governor, who spoke during the 12th Kaduna State Council on Health Meeting in Kaduna, said the N6 trillion on fuel subsidy, which was a quarter of the budget, was more than the entire budget of states and local governments on health this year.

According to him, the Nigerian National Petroleum Company Limited, NNPCL has not remitted anything to the federation account since the last quarter of 2021, adding this had forced Nigeria to depend mainly on import duties and taxes as revenue allocation shared by the three tiers of government. 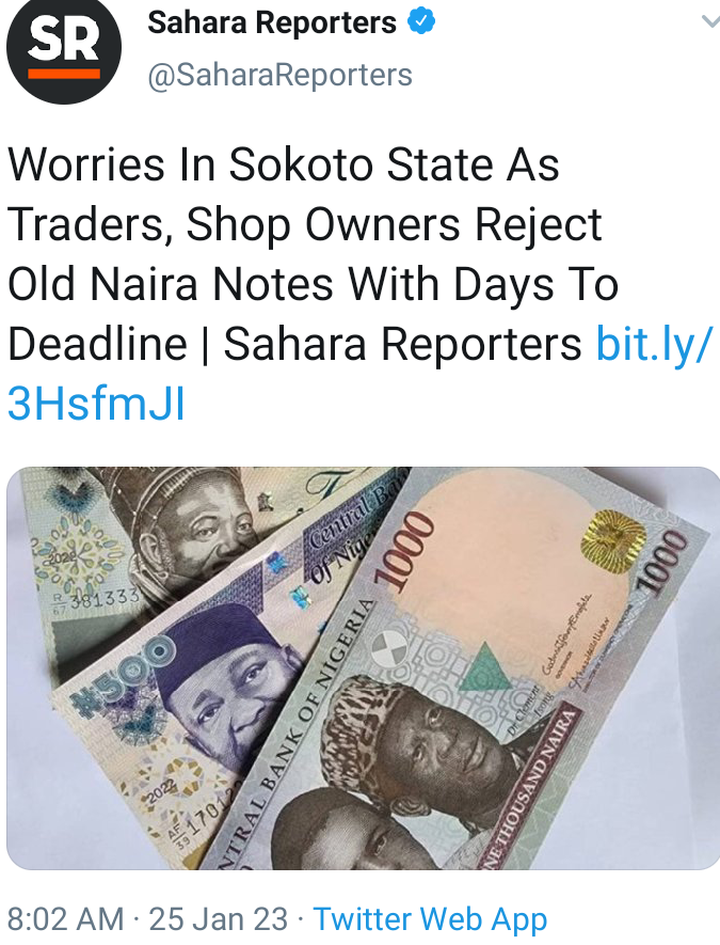 The Central Bank of Nigeria had stipulated January 31, 2023, as the deadline for issuance and circulation of the old N200, N500 and N1,000 denominations of the country’s currency following the introduction of new banknotes.

SaharaReporters had reported that with a few weeks to the deadline given by the Central Bank of Nigeria (CBN) for the use of the old naira notes, a cross-section of Nigerians across the country have lamented the scarcity of the new naira notes.

A visit to some markets on Tuesday afternoon in Sokoto revealed that eight out of every 10 traders in the state no longer accepted the old naira notes as legal tenders.