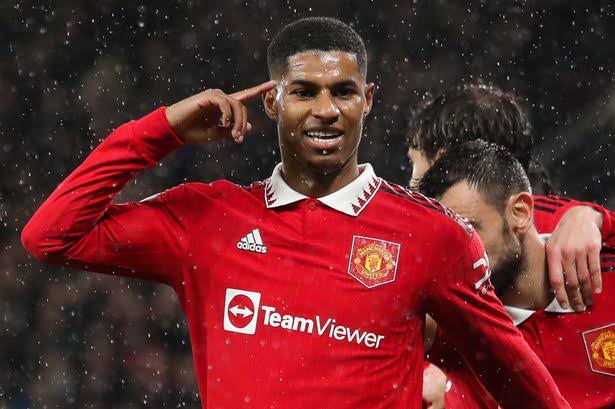 Erik ten Hag has refuted claims that Marcus Rashford was injured during Manchester United’s 3-0 victory over Nottingham Forest on Wednesday.

The attacker, who opened the scoring for the Red Devils after six minutes with a sublime individual goal, received an accidental elbow to the chest from Marco Freuler just before the hour mark.

Ten Hag insists he had already planned to replace his in-form goalscorer with Alejandro Garnacho before United’s player was injured and left on the ground for a brief period of time.

“No, we already planned the sub to come on,” the Dutchman told Sky Sports. “There are many games to cover and it was 2-0.

Rashford’s opening goal was his tenth in as many games since the World Cup. The 25-year-old is enjoying his best-ever run of form in a United shirt.

This season, he has already scored 18 goals in all competitions and is almost certain to surpass his previous season high of 22 goals in 2019/20.

Due to Rashford’s opener and goals from Bruno Fernandes and Wout Weghorst, United will enter the second leg of the Carabao Cup semi-final next week in a commanding position.

Despite the impressive margin of victory, Ten Hag was dissatisfied with certain aspects of his team’s performance at the City Ground.

“I am happy with the performance,” he said after the game. “I think over 90 minutes we controlled the game. There was one moment in the game that could have changed the game, and that’s what we have to be aware of.

“We have to improve, but all over, I think it was a good performance from our team. The first leg is done but another leg to go.”

The ‘moment’ referred to by Ten Hag was Sam Surridge’s goal in the middle of the first half, which was the result of sloppy United defense. The goal was ultimately disallowed for offside, but the manager of the Red Devils was still annoyed by the incident.

“They changed the system and we didn’t read that,” he said. “That can’t happen. But I have to say they also did the same with counter attacks, we knew that before. It can’t happen and that is a moment where we still have to learn. We have to improve as a team. If we want to be top, moments like that can’t happen.”

Content created and supplied by: SportsLight12 (via Opera
News )