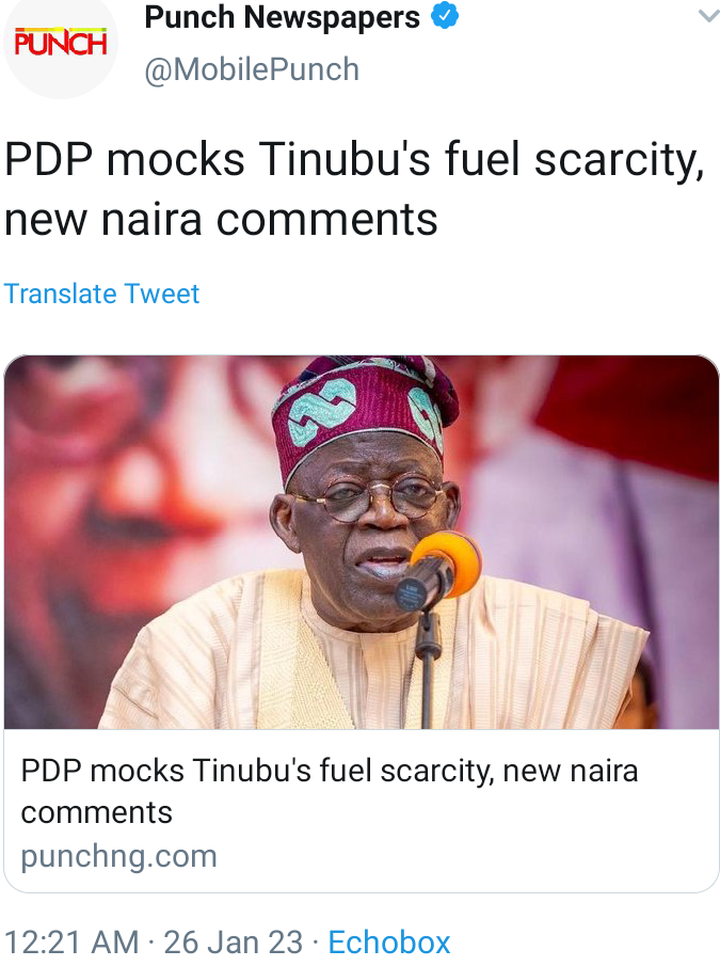 The Atiku-Okowa campaign organisation has berated the presidential candidate of the All Progressives Congress, Asiwaju Bola Tinubu, for trying to blackmail the President, Major General Muhammadu Buhari (retd.), and blame the APC-led Federal Government over his “looming rejection by Nigerians.”

The campaign also said that it found it pathetic that Tinubu was seeking a face-saving measure ahead of his “shattering electoral defeat by shedding crocodile tears” and claiming that the redesigning of the naira notes and the fuel crisis under the APC administration, which he had been allegedly benefitting from, were plots to scuttle the 2023 general elections.

Spokesperson for the campaign, Kola Ologbondiyan, while further speaking in a statement on Wednesday in Abuja, noted that “it is unfortunate that Asiwaju Tinubu is trying to hoodwink Nigerians by seeking to exonerate himself and blame others in the Buhari led-APC administration from the biting fuel scarcity in the country, when in reality he (Asiwaju Tinubu) is known to be behind the insensitive and anti-people policies that have brought so much calamity to our country the current persistent fuel scarcity. 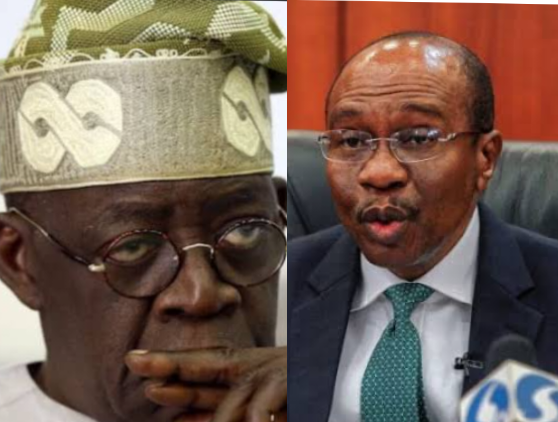 The Central Bank of Nigeria (CBN) has denied scarcity of the new naira notes as alleged by some Nigerians. 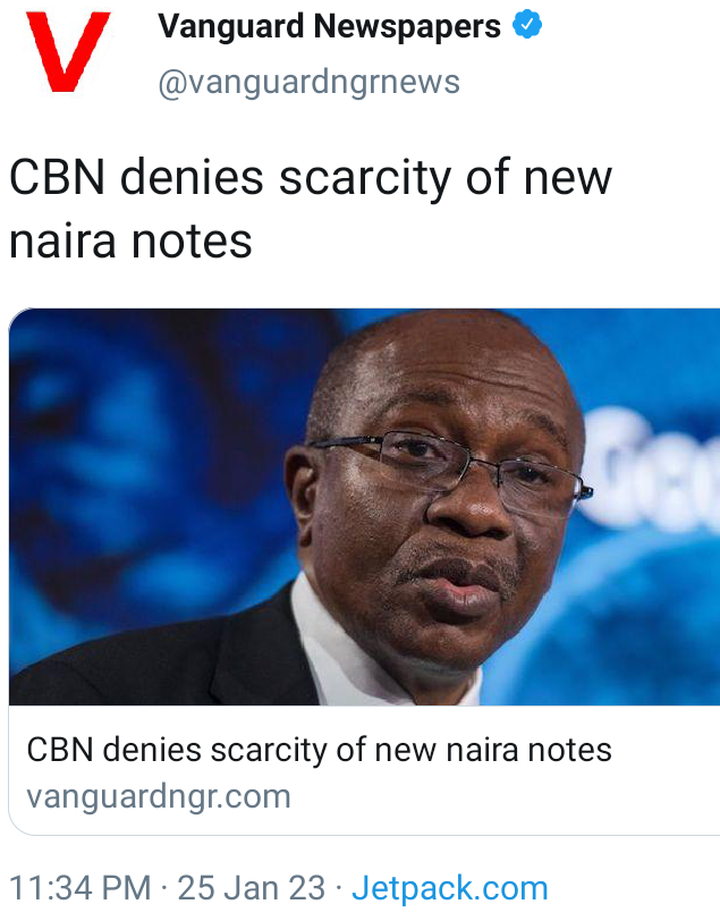 The CBN Governor, Godwin Emefiele, represented by Musa Jimoh, Director, Payment System Management Department of the bank, denied the allegation in a news conference on in Jos.

”The CBN has massively supplied the new notes to commercial banks to dispense both at counters and ATMs.

”This is to enable quick circulation and we want to advice commercial banks to desist from keeping the cash away from the public or face the stiffer sanction,”he said

Emefiele advised citizens to deposit their old notes at any commercial bank and acquire new ones with immediate effect, insisting that the Jan. 31 deadline remained sacrosanct.

As the crisis in the Enugu State chapter of the All Progressives Congress (APC) deepens, its state executive committee (SEC) has set up a five-man disciplinary committee to look into petitions and reports of fact-finding committees that investigated allegations of anti-party activities levelled against former Senate President, Ken Nnamani and two other members of the party in the state. 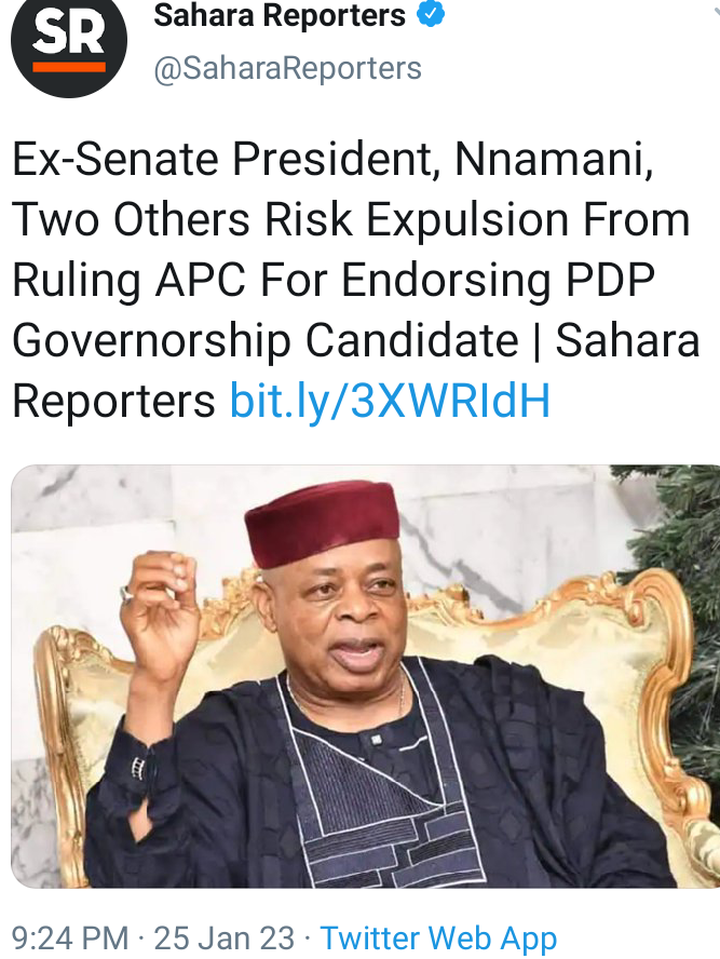 The disciplinary committee, which is headed by the State Assistant Legal Adviser, Barr. Vincent Chieyina and Secretary, Hon Jekwu Nnaji, is to invite Senator Nnamani and two others, namely a former Commissioner in Enugu State, Ozor Joe Mmamel and Mr. Nelson Maduka Arum to answer the charges against them.

The state secretary of the party, Dr Robert Ngwu, who presented the resolution of the state executive committee (SEC) after their meeting, at the party’s zonal office in Enugu, on Wednesday, said the party would not hesitate to expel or suspend Senator Nnamani, Ozor Mmamel and Arum if found culpable.

PDP Crisis: You Want To Deal With Me But You Can’t Win Election, Says Wike

Governor Nyesom Wike of Rivers State has dismissed threats by some politicians who allegedly promised to deal with him upon winning the forthcoming presidential election.

Wike’s comments may not be unrelated to a warning issued last month by the Peoples Democratic Party (PDP) presidential campaign organisation to the Rivers governor and four others in the party.

The governors otherwise known as the G5 or Integrity Group broke ranks in the wake of the May 2022 presidential primary that produced former Vice President Atiku Abubakar.

This later prompted a response from the campaign’s Director General, Governor Aminu Tambuwal of Sokoto State, who said the party will “explore lawful avenues to bring any of its erring members to book”.

INEC National Commissioner retired Maj.-Gen. Abubakar Alkali said this on Wednesday in Abuja at a One-day National Dialogue organised by Cleen Foundation with the theme “Security Agencies and Nigeria’s 2023 Election.” 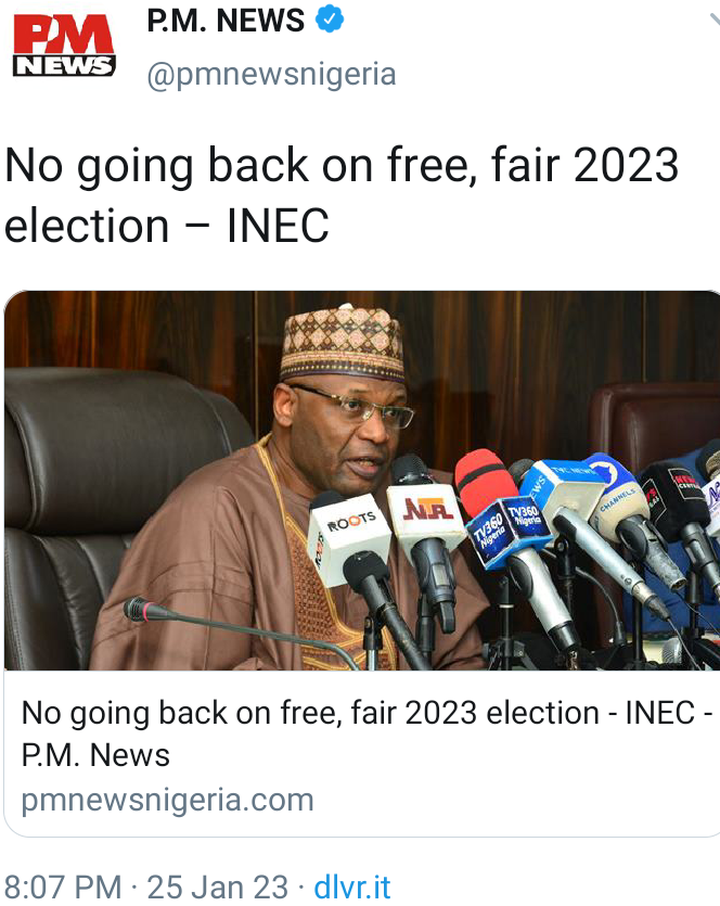 Alkali said that the INEC was prepared to deliver on its mandate without fear or bias.

“I want to state clearly that the mission of INEC as established by the Constitution of the Federal Republic of Nigeria, is to serve as an independent and effective election management body capable of conducting free, fair, credible and all-inclusive elections for the sustainability of democracy.